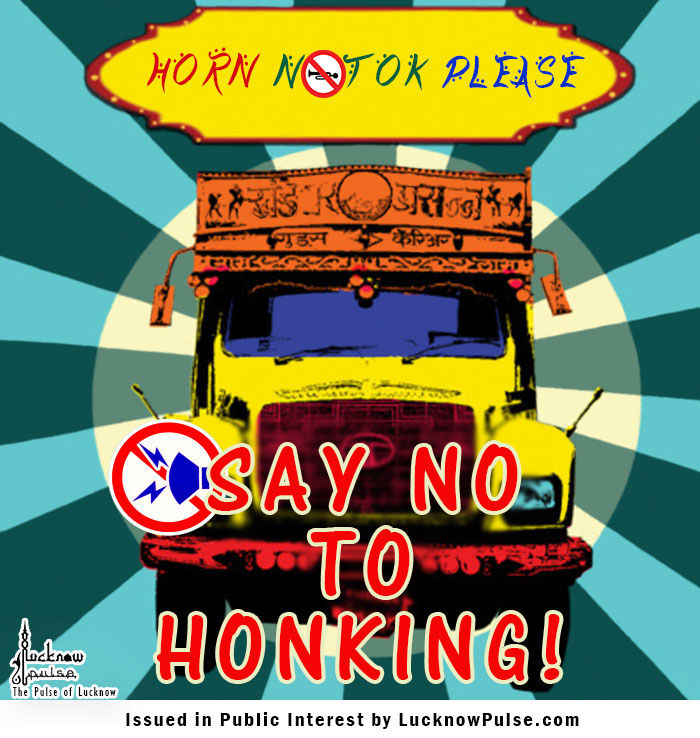 Lucknow prides itself in demonstrating Pehle Aap Tehzeeb and civility in every walk of life. Right from taxi drivers to rickshaw pullers and doctors to lawyers, people inherently communicate and interact in a courteous manner. However, with the fast-paced robotic life, unruly traffic and the urge to get ahead of others, it has been seen lately that the City of Nawabs is perhaps bidding adieu to its culture and Pehle Aap Tehzeeb behind. Quite often, people have been seen parking their vehicle haphazardly on the roads, arguing with traffic police on traffic rules, and even engaging in unnecessary honking, which is contrary to the city’s ethos.

Honking All the Way Around

Today, Lucknow has acquired a dubious distinction as one of the country’s noisiest cities and the 18.5 lakh honking vehicles and people here may be held responsible for it. A recent survey conducted by a leading English newspaper, which covered different traffic spots in Lucknow, including Charbagh, Hazratganj, Alambagh, Chowk, Bara Birwa, Aminabad and Purania Crossing, found that honking was at its highest level at each place. Noted city historian, Dr. Roshan Taqui, has said that power horns have actually become a noisy way of life replacing nawabi way of life, which is contradicting the tradition of pehle aap.

Bikes and cars fitted with power horns are the new status symbols in Lucknow. Apart from pressure horns used by government vehicles, politicians and bureaucrats on their SUVs in a show of strength, young people with new cars and bikes settle for nothing less than a power horn to flaunt and seek attention. The survey also found that people honked unnecessarily in spite of being stuck in bumper to bumper traffic and even honked when the road was free from traffic. Lucknowites feel that people do not respond to a low-volume horn on the roads, hence opting for a high decibel horn is the best way to alarm them and clear their way on the road.

Studies conducted by Indian Institute of Toxicology Research (IITR), Lucknow, and UP Pollution Control Board have found that honking considerably increases noise pollution in Lucknow both during the day and night. The studies found a constant 85-90 decibel noise at seven major crossings in the city during the day.

Dr. Pankaj Srivastava, senior ENT consultant at Civil Hospital, said the impact of honking poses a threat to the life of bikers, cyclists and pedestrians. Dr. Ajay Singh from King George Medical University (KGMU) said that every fourth person who suffers with an orthopedic injury in road accident is actually a pedestrian. Many survivors can easily recall feeling giddy while walking on the road and noise is the reason most of the time. Dr. S C Tewari, head of geriatric medicine department, KGMU, has said that honking as a compulsive behavior demonstrates the person is not at peace with oneself and is impatient. City-based behavioral psychologist, Rajesh Pandey, said ‘woh bhi to karte hain’ and ‘chalta hai’ attitude is quite rampant in the city.

Confederation of Indian Industry (CII), Young Indians (Yi), Lucknow Chapter, launched ‘Horn No Ok Please’ campaign in March 2016 at CII Lucknow Office. The campaign’s objective was to spread awareness among people to avoid honking to reduce noise pollution. Three CEOs from Kochi partnered with Yi to promote the campaign over twelve big chapters across the country. The CEOs would embark on a unique road expedition called ‘The Great Indian Footprint,’ covering 12,000 kms across 48 cities, 15 states including U.P. During the expedition, the CEOs would spread the message of ‘Horn Not OK Please’ and vow not to honk for 12,000 kms across India. Lucknow Pulse too ran a campaign early this year to sensitize people about traffic safety.

On the other hand, the central government is planning to introduce new rules to control noise pollution and impose fines from up to Rs 1 lakh on the offender. The new measures would also include imposing penalty on car manufacturers, dealers and owners to check the menace of excessive honking on Indian roads. The rules would specify how and when a person might resort to honking and prohibit it in residential areas and silence zones. According to the proposals, those who honk continuously or needlessly would attract a fine of Rs 500 for first offence and Rs 1,000 for subsequent ones. In addition, there is a proposal to impose a fine of Rs 5,000 on vehicle owners for installing multi-toned and air horns that emit a loud, harsh noise. Garage owners and car dealers who install such horns will face a much higher penalty of Rs 1 lakh.

Schools, colleges and driving schools can also play an active role in educating students about the perils of excessive honking and how it can affect ones health. Educational institutions must organize events in the presence of senior traffic police officers where students can be sensitized about traffic rules, including compulsory wearing of a helmet and hazards of needless honking.

If we, as citizens, take responsibility to follow traffic rules properly, including that of not honking unnecessarily, then our roads and streets would be a much better place to drive and commute. Instead of finding ways to seek attention or show off on roads by using high-decibel horns, which could lead to inconvenience to pedestrians, bikers or cyclists, our responsibility lies in showing sensitivity towards individuals walking or driving on the roads.

Also Read: Plastic Ban in UP: Here’s How to deal with it like a Pro