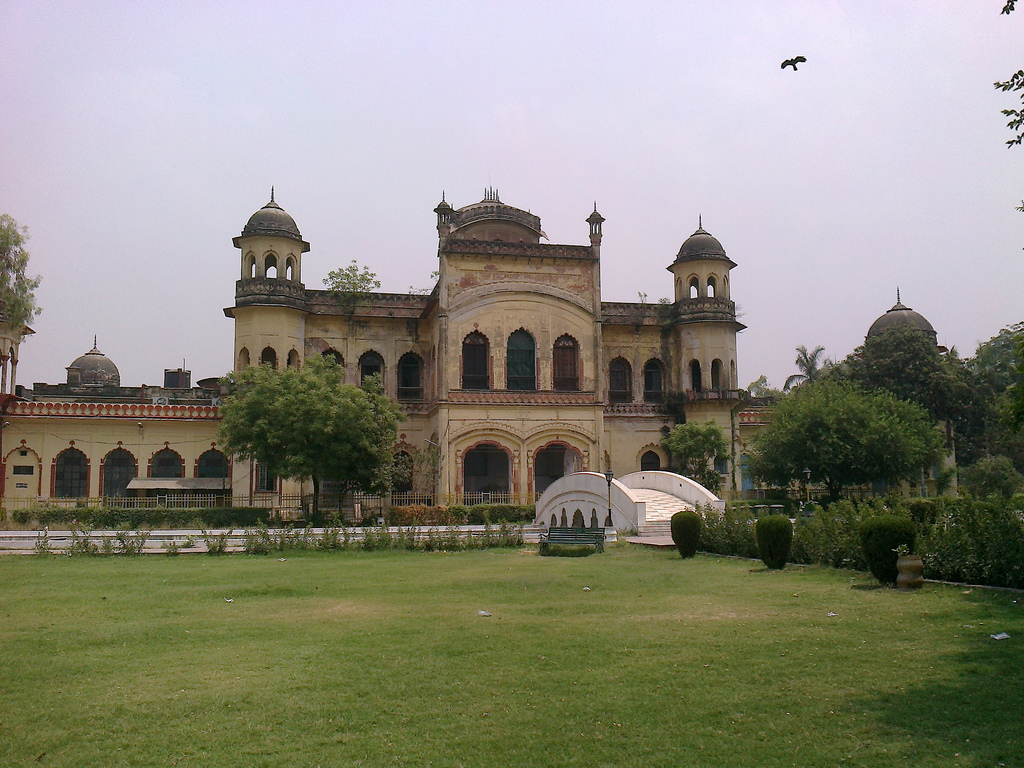 Lucknow was considered the cultural capital of northern India during the Nawabi era. The Nawabs used to enjoy the traditional Ghazals and Nazms sung by accomplished singers in their courtrooms and reputed Kathak dancers are said to have impressed the Nawabs with their artistic dance moves.

With their appealing grace and charm, the courtesans, who sang and danced to please the Nawabs were generally linked personally with the Nawabs of Awadh. These courtesans dedicated themselves for the promotion of dance, music and singing during the reign of the Nawabs. Extensive arrangements used to be made by the nobles so that courtesans, dancers and singers could perform alluringly in front of the Nawabs.

Nawab Wajid Ali Shah has been credited with promoting the various forms of art in Awadh. He was considered to be an enthusiastic patron of the arts. Shastriya Sangeet and Thumri flourished during the Nawab’s rule of Awadh when legendary Ustads such as Jafar Khan, Basit Khan and Pyar Khan are said to have performed for Nawab Wajid Ali Shah. Traditional Kathak dance also gained fame in Lucknow and with the grand spectacle of the Jashan, Rahas, Jogiya, and Kathak performances and dance dramas; the city became the fascinating cultural hub where reputed dancers, poets, and musicians thrived.

The famous Lucknow Gharana evolved during the Nawabi rule, particularly Nawab Wajid Ali Shah and Nawab Asaf-ud-Daula. Kathak, which originated in Benaras and Ayodhya is said to have prospered in the courtrooms of the Nawabs. Legendary exponents of Kathak such as Kalka-Bindadin brothers and Prakashji used to perform for the Nawabs.

The fascination of the Nawabs for music, dance and singing is beautifully portrayed in classic period films such as “Umrao Jaan” and “Shatranj Ke Khiladi” and both the films went on to win quite a few national and international awards.

The interests of the Nawabs for cultural activities led to the establishment of Pari Khana, where courtesans used to live and rehearse their dance and singing. It was built during the reign of Nawab Wajid Ali Shah.

Architecture of the Pari Khana

The central hall of the building was adorned with several attractive chandeliers and the pristine marble-made courtyard that had beautiful ceramic flower pots to enhance the setting for open-air gatherings or functions.

The Pari Khana has a beautiful bridge built over a canal. This canal provided water for the bagiyas (gardens) located in Kaiserbagh area. Exquisite lamp posts and big marble sculptures provided a picturesque setting for the courtesans to perform in front of the Nawabs.

The complex has a beautiful garden with different varieties of seasonal plants, flowers and trees. It has beautifully paved footpaths for people to be able to reach the building.

The courtesans of the Pari Khana were divided into three groups. The first group comprised Kanchan tribe and the courtesans of this group used to make money through prostitution. They were generally said to have come from Punjab and Delhi. The second group comprised the Chunawalis and their occupation was to sell chunam (lime mortar). Later, they joined this group and started entertaining the Nawabs. Chunawali Haider was the most popular courtesan of this group as she is believed to have had a very melodious voice. The third group was known as Nagarnt, a sect from Gujarat. All the three groups were only popular in Lucknow and they were considered the pride of Pari Khana.

The word “Pari” is taken from Urdu vocabulary meaning an angel or fairy. The Pari Khana was the home to numerous courtesans, who were categorized as paris. Young and beautiful females, who were the descendants of courtesans, lived at the Pari Khana. The young girls were immaculately trained in refined mannerisms and etiquettes at the Pari Khana so that they are able to please the Nawabs not only with their customary dance and singing but also with their sophisticated etiquettes and manners.

The girls were taught the finer nuances of traditional Kathak, Shastriya Sangeet and other affable gestures so that they get accustomed in their art and skills. The girls were categorized as paris because of their important roles in numerous Rahasya (dramas) that were organized for Nawab Wajid Ali Shah at the Pari Khana.

Young and talented courtesans with their physical appeal and sophisticated mannerisms enjoyed the support and liking of the Nawabs and even British generals. The courtesans are also said to have performed mujras (dance) to entertain the invited foreign guests with their melodious Nazms at private gatherings in the courts of Nawabs.

The practice of dance, music and singing was banned by the 4th Nawab of Awadh, Nawab Amjad Ali Shah. He acted on the direct orders of Shia Sultan-ul-Ulema, who ordered musicians, singers and dancers to leave Lucknow. However, even the highest order could not influence Nawab Wajid Ali Shah, who continued to support all such artists. Nawab Wajid Ali Shah knew how to play sitar and tabla and he is known to have rendered quite a few pleasant compositions that were included in traditional ragas.

Today, the Pari Khana houses the Folk Art Museum. Visitors get a chance to explore the personal characteristics and likings of the Nawabs through preserved paintings and artifacts. The museum has a unique collection of 1500 artifacts including rare photographs and paintings. It has a library with extensive collection of books and displays folk paintings, clay toys, terracotta, musical instruments and wooden antique pieces.

The atmosphere of music, dance and singing at the Pari Khana was revived in the early 20th century in the form of the Marris College of Music, which was started on the premises. The college is now known as Bhatkhande Music Institute, a deemed University.

Lucknow’s love for music comes from the Nawabi influence it derives from its glorious past. The liking for these creative forms will never fade in the hearts of a true Lakhnawi, just as the city’s relationship with the Gomti will always connect people with a common thread of love and brotherhood.