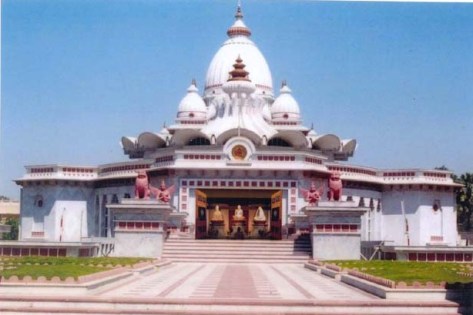 The Rama Krishna Math, at Niralanagar in the city of Lucknow is a renowned temple dedicated to Sri Ramakrishna and Swami Vivekananda. The popularity of the Math in Lucknow goes on to exemplify the city’s secular character, a trait inherited by Lucknowites from the Nawabs of Awadh.

The Math, with more than 150 branch centers in different parts of the country as well as the world has its headquarters in Belur Math, Kolkata. Your trip to Lucknow will not be complete without a visit to the Ramakrishna Math, a place replete with spirituality.

History of the Ramakrishna Math

The history of the Ramakrishna Math, Lucknow dates back to the latter half of the nineteenth century when the Indian sage Swami Vivekananda committed his life to spread the message of his teacher Sri Ramakrishna. Initially, the branch centres in the Northern zone were set-up in the religious towns of Vrindaban and Varanasi, but Lucknow soon followed suit with a centre coming up in the city under the leadership of Sarat Chandra Bandhopadhyaya. The centre initially started functioning from Aminabad locality, and was moved to its present location after the then Chief Minister Chandrabhanu Gupta sanctioned a part of land to the monks, impressed with their efforts to serve mankind.

The Ramakrishna Math standing tall amidst the lush green garden area is sure to keep you enchanted with grandeur at its best. Right from the roadside, you can catch a glimpse of the idols of the deities (Shri Ramakrishna, Ma Sharada and Swami Vivekananda) filling you with an unknown calm. Read on to revel in the architectural finesse of the Ramakrishna Math, which was opened in Lucknow on 2nd February, 1987.

Architecture of the Ramkrishna Math

The imposing temple has been built in marble stone, taken specifically from the mines of Bundi and Makrana to lend an elegant feel to the temple. To add to its sophistication and grace, the white marble-stone has been contrasted with red sandstone, a style taken up by the Mughals later on. The passage from the main gateway to the temple entrance has been adorned with figurines from the Hindu mythology such as the conch shell, disc, lotus, trident, drum, thunderbolt and swans painted in red cement. The temple is an intricate mix of different styles of architecture, including the ones imbibed by the Chandellas, Chalukyas, Pallavas apart from the Mughals and the Jains.

The main gateway to the temple is adorned on both sides with the sculptures of the Elephant, the bull, the lion and Garuda – the carrier of Goddess Lakshmi, Lord Shiva and Lord Vishnu respectively as per the Hindu scriptures. The entrance to the main temple is through a series of broad steps lending the temple an air of modernity. You are sure to be mesmerized by its architectural beauty once you catch a glimpse of the imposing structure.

A beautiful statue of Lord Ganesh is seated just above the Nat Mandir or the prayer hall, exquisitely carved out with a beautiful blend of brass and copper. The floor of the prayer hall has been done up in contrasting colours of white marble stone and brown kumri range stone. The lotus petals etched out of large copper plates have been placed beautifully on the floor, giving it a religious feel. The prayer hall has a dome-shaped ceiling, the centre of which has wooden spherical panel from which hangs a grand chandelier, with around 256 lights arranged in three tiers. The inner dome is supported with two spherical beams on which hang the portraits of the direct disciples of Sri Rama Krishna.

The Garbha Griha or the Sanctum Santorum is the innermost chamber of the temple consisting of nine domes. Inside the Garbha Griha, the idols of Sri Ramakrishna, Ma Sarada and Swami Vivekananda have been placed and are worshipped on a daily basis. On the top, the canopy is fixed on a wooden frame which has the figures of a swan, lotus, a small drum and a trident intricately carved on it. The ‘’Holy Trinity’’ is placed under this canopy on their respective marble pedestals, atop which a lotus has been etched out from wood. To add to its glory, the main dome is elaborately done in heavy zari, which is a reflection of the Islamic style.

The Ramakrishna Math, suffused with holiness and spirituality, should be high on the list of must see places, on your visit to Lucknow, the city of Nawabs. You must drive down to this place to take in the tranquillity and serenity that its beautiful surrounding and ambience offers you.проверить запросы гугл