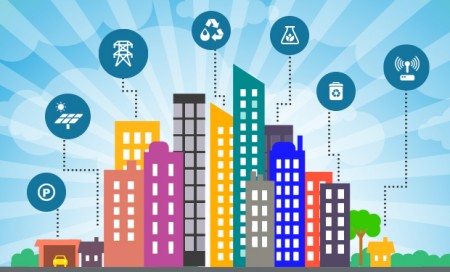 Lucknow, the capital of Uttar Pradesh, popular for its historical significance and culture, tops the second list of Smart Cities announced by the Urban Development Ministry, Government of India. It is a matter of immense pride for Lucknowites to have their city get world-class infrastructure facilities they have been waiting for. Lucknow obtaining the smart city status would enhance the city’s cultural, social and economic activities to a large extent.

However, there is immense pressure on infrastructure systems in the country, including transportation, roads, drainage and sewerage, water supply, electricity, uncollected solid waste, etc. The crumbling infrastructure has actually led to deterioration of city environments, and in many cities, problems of poverty, pollution, over population, traffic congestion, crime, sewage treatment and inadequate housing are leading to alarming proportions.

To overcome these problems and provide sustainable and clean environment along with inclusive development to its citizens, the Smart Cities Mission initiated by Government of India is a step in the right direction. The purpose of this mission is to improve quality of life and augment economic growth by developing the local area and harnessing technology, which leads to smart results.

A typical Smart City in India would have the following features:

On the other hand, the central government would encourage the cities or state governments to add more Smart Solutions such as:

On May 24, 2016, Union Urban Development Minister Venkaiah Naidu announced the second list of names of 13 more cities that would be developed under the Smart Cities Mission. Lucknow topped the list of Fast Track Competition winners, which was conducted for 23 cities. The City of Nawabs had missed the first list of 20 smart cities that was announced by the urban development ministry in January, 2016. However, Naidu said Lucknow improved the overall quality of its smart city program by 19 percent to make it to the coveted list this time around. Ongoing development projects such as Lucknow Metro Rail, IT City, Gomti riverfront development, Lucknow-Agra Expressway, to name a few, could have assisted Lucknow in securing a place in the list.

Lucknow District Magistrate (DM) Raj Sekhar credits this achievement to the several infrastructure development projects undertaken by the ruling Samajwadi Party (SP) in Lucknow and other districts in the state during the last one and a half year. Sekhar said that the development of metro rail, Gomti riverfront and Lucknow-Agra expressway is in full swing under the leadership of Chief Minister Akhilesh Yadav, and there will be new CNG buses and sanctioning of new CNG filling stations soon, which would make the environment clean and healthier.

To win the coveted smart city status, a specific area of the city needs to be developed holistically. Sekhar said that Qaiserbagh has been selected for comprehensive facilities and development for transport, e-governance, safety of citizens, proper parking, among others.

Dinesh Sharma, Mayor of Lucknow, who has been heading Lucknow Municipal Corporation (LMC) for the last 9 years, credited the local body for the accomplishment. Sharma said that LMC has improved significantly in areas of traffic management, road development and sanitation. The Mayor further added that LMC would draft an effective water policy and impose penalty on burning of waste outside and open defecation.

Though, the concept of Smart Cities is very interesting, it is quite challenging at the same time, considering providing regular quality services to lakhs of people living in the city. It would require a combined effort of the government and people to make things happen and make Lucknow a Smart City in the real sense. Proper guidance and educating people on how to use and maintain the smart services properly can go a long way in maintaining and enhancing the charm and beauty of Lucknow, and once realized, it would be a delight to witness the old world charm and modernity that Lucknow would offer soon after becoming a Smart City.