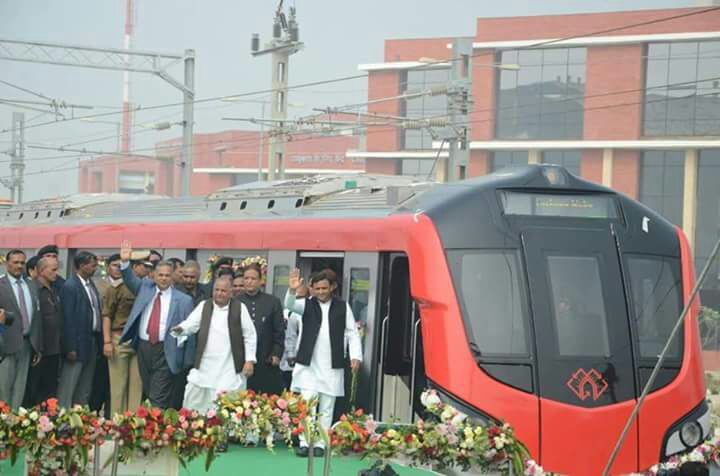 Much awaited Lucknow Metro Rail made its trial run on 1st December 2016.  Mr. Akhilesh Yadav, Chief Minister Uttar Pradesh, flagged Lucknow Metro from Transport Nagar depot for the trial run up to Charbagh railway station. It covered a total distance of 8.5 km in its maiden run.

Lucknow being the capital city of Uttar Pradesh is also one of its most populous and busiest of cities. The present population of Lucknow city is more than 3 million. Besides, being an important trade and services centre, Lucknow continues to grow exponentially. Thus, a rapid rate of growth of the city and the subsequent urban expansion had since long highlighted the limitations of then available public transport infrastructure.

To solve the connectivity lacunae and thereby augment the existing transport infrastructure of Lucknow city, Govt. of UP decided to execute Lucknow Metro Rail project in 2013. Lucknow Metro Rail Project was slated to provide city with quick mobility across the city, all the while adding to the list of some path-breaking infrastructural developments in recent times in UP.

Original “In-principle Approval of Part-1A of DPR” was given by MoUD on 27th December 2013. The contract for the development of Lucknow Metro Rail was bagged by Alstom, the renowned French engineering company.

Unique Features of Lucknow Metro include:

Initially tested with 4 coaches, Lucknow Metro is expected to add 2 more coaches near the completion of project.

At the 5th Annual Metro Rail Summit, held in New Delhi on 11th March 2016, Lucknow Metro Project was awarded ‘Best Metro for Excellence in Innovative Designs’. In competition were other metro projects of the country like Delhi Metro, Mumbai Metro, and Jaipur Metro etc.

It is noteworthy that the first phase of the metro rail project has been completed in less than two years from the date of commencement of work. Kudos to the Uttar Pradesh government, the Chief Minister and the Central Government too.

Also Read: Local Commute in Lucknow: The ever-changing rides of a Lucknowite