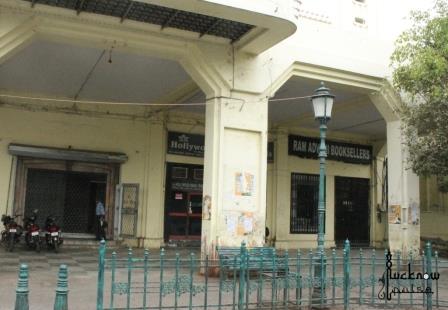 In the 1960’s, the popular Mayfair building of Lucknow housed the  Mayfair Cinema, the British Council Library and Ram Advani Booksellers, recalls a proud Lakhnawi. The City’s fanciest restaurant of the time, Kwality resturant, known for its pastries and ice creams was also present in the same building.

Across the road was the almost as posh Royal Café with Ranjana Café close by. A lot of things have changed over the years. Ranjana Cafe closed down, Royal Café has moved location, Kwality, Mayfair and the British library are also gone. The only survivor is the Ran Advani booksellers. The owner, Mr. Ram Advani continues to zealously interact with anyone interested in books.

The Ram Advani book sellers, located in Hazratganj, is the city’s oldest and most cherished bookstore; a delight for the book lovers of Lucknow.

This literary oasis was opened on 15th February, 1948 by Mr. Ram Advani in the Mayfair building. Today, the bookstore is a major landmark in Hazratganj, and the shop proprietor has earned great admiration and respect from generations of readers, research scholars and academicians, whom Mr.Advani treats as both customers and friends. To experience this academic atmosphere, and to submerge yourself in the world of books, you must set foot in this book store on your visit to the Lucknow city.

This nonagenarian bookseller has been in the business for more than sixty years advising and mentoring all classes of bibliophiles, be it Indian or foreign nationals. He bought this shop from his maternal uncle in the year 1951 and named it as ‘’Ram Advani Booksellers’’.

Ram Advani’s role has been pivotal in shaping the careers of some of the renowned historians such as Rosie Llewellyn Jones, William Dalrymple, Shahid Amin, Alok Bhalla, Sudhir Chandra, Basudev Chatterjee, Michael Fisher, Mushir-ul-Hasan, David Lelyveld, D.A.Low, Thomas and Barbara Metcalfe, T.N.Madan, and Francis Robinson, among others. His role has been instrumental in furnishing historians with an unparalleled exposure to education in the city of Nawabs.

The rich collection of books includes volumes on Sociology, politics, anthropology, economics and literature, apart from the bestsellers. However, it does not include fiction.It also houses a complete collection of Awadh culture and writings on the city of Lucknow. This renowned bookstore of Lucknow has a section on Indian History, which is simply commendable, with volumes authored by real experts in the field.

Lucknow has evolved as a great center for research in varied domains, thus enjoying good readership.The Ram Advani book sellers is a one-stop shop for those who like to browse through a vast collection of works by different authors to search for a good read.  You are in for an informative discussion on any topic with the legendary owner, once you are seated in his book haven.

The bookstore is built over a vast area, with its sliding glass pane bookshelves and wooden floors. For anyone and everyone who likes to read, Ram Advani book sellers is undoubtedly the only place which will satiate your thirst for books. One of the oldest customers of the Ram Advani booksellers is ‘’the house of Raja Sahib Mehmoodabad’’, and to date, the bookstore has catered to four generations of the Raja.

The Ram Advani Booksellers bears testimony to the rich intellectual past of the Lucknow city. It stands out as a representation of the glorious past in a place, which is dominated by many lavish bookstores. You must not skip a visit to this famous bookstore when visiting the city of Nawabs.

The iconic bookseller – Ram Advani ji left this world on March 9, 2016. His farewell is seen as ‘end of an era” by all those who knew and admired him. Apart from being a revered gentleman and a passionate bookseller, he was also seen as a very knowledgeable person. After his death, the family of Ram Advani ji ran the book shop for a while to eventually close it down forever. And another Lucknow landmark ceases to be…