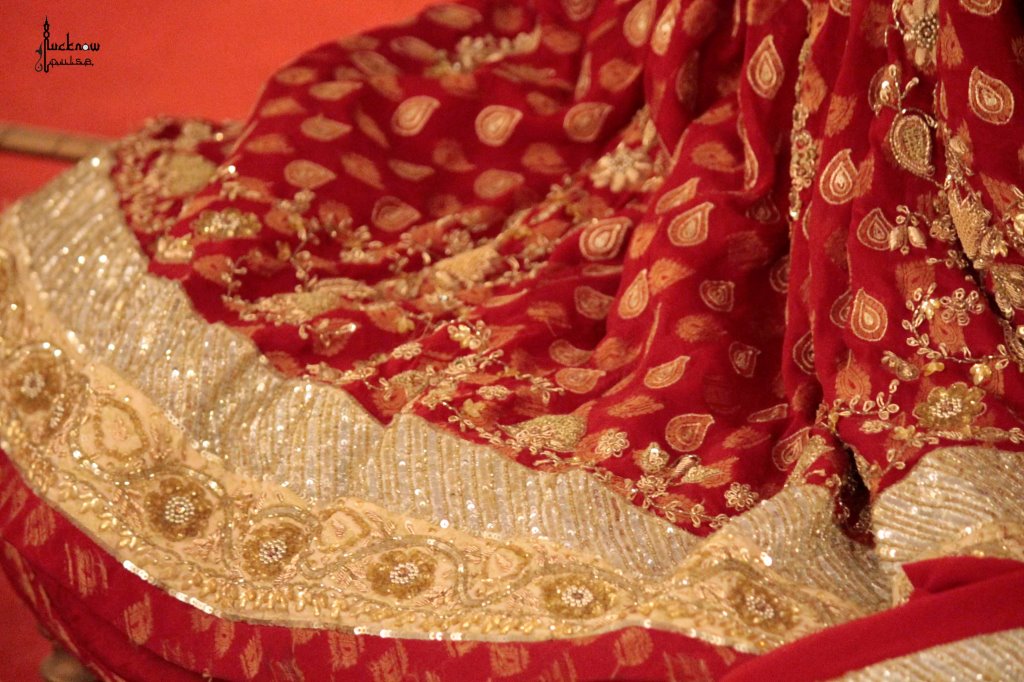 Zardozi is a fascinating form of embroidery work that originated under the influence of Mughal Kings in the Kingdom of Oudh, currently identified as the central part of Uttar Pradesh in India. A large number of artisans engaging in Zardozi or Chikankari are employed in the trade of developing beautiful embroidery on a variety of textile material.

Zardozi and Chikankari are among the most iconic forms of embroidery that continue to represent Lucknow City on the World fashion map. A renowned scholar on Arts and Culture once said, “Hand occupies only second place after brain in terms of cultural evolution.” To this date, handmade artifacts are sole witnesses that teach us about the cultural evolution of human civilization. As time progressed, each of the art forms that employed handiwork became sole representatives of the indigenous cultures. It is through these art forms that we are usually introduced to these cultures by virtue of these handmade artifacts.

However, while Zardozi continues to wow the world of owing to its exquisite and brilliant feel, the very hands that create this magic find themselves struggling for a decent livelihood today. Men and Women behind this centuries old fine craft unfortunately, haven’t even got the recognition they deserved. As a result, the newer generations are shying away from getting into the hereditary trade as they call it.

Zardozi artists even since Mughal period have committed themselves and their generations to keep this precious art alive. Today, they feel they are denied their rights to be a part of mainstream owing to the economic status, which again stems from the unfair working conditions as well as miniscule wages that they receive as their remuneration for dedicating their lives. What is even more remorseful is the apathy that these artisans face from all quarters be it industrialists, businessmen, or political leaders.

A wonderful movie on the state of Zardozi artisan community has been produced by FEED (Federation of Education and Economic Development).

While the Government of India has always been pretty active towards the cause of recognition and upliftment of handicrafts of India, Zardozi workers somehow have always felt short in receiving the benefits extended to them. Officials and retailers often attribute this trend to the laid-back attitude of these artisans, however that is rather a partial observation.

In cultural terms, community of Zardozi artisans has always comprised highly self-reliant, and motivated individuals who love their trade as much as their self-esteem. There has always been a tendency among the artists to stay aloof from the worldliness and remain committed to their work. Zardozi artisans too like any other artist community know their worth, and thus do not indulge into securing their livelihood through lobbying or staging sit-ins.

Any related governing bodies must ensure that approaching any artist community must be a task well guided by intent as well as respect for them as well as their craft. It is only then that the state of that craft will heal. Another discouraging fact is that this disgruntled community of Zardozi artisans is often exploited by their local politicians at the times of elections for legislative houses and assemblies. Lack of education as well as lack of well-deserved facilities paves the way for them to be misled by those promising them the moon they have always craved for.

Sadly enough, the problem faced by Zardozi artists exceeds the number of one. In fact, the issues faced can be categorized separately, indicating that in order to uplift the state of Zardozi workmanship, much more than a relief package is required.

The process of developing Zardozi embroidery, involves mounting of the textile material onto a wooden frame, usually a feet and half from floor level. The artisans then, equipped with special needles and sequin materials, sit down on the floor surrounding the frame. Usually it is a 12-hour straight schedule for them, which takes a heavy toll on their backbones often culminating in severe orthopaedic disorders.

Besides, poor lighting conditions also take a heavy toll on their eyesight.

Reports say that cases like these have forced some of the best hands at work to retire early enough, thus putting their financial independence under peril.

Zardozi artisans must be covered under occupational hazard initiatives by both Government as well as NGOs. This must include training to adopt safety guidelines as well as ensure healthcare for those adversely affected.

Another issue that Zardozi artisans face regularly comes from within the Zardozi artisan community. Overwhelmed by the artistic ego perhaps and their once legendary status, Zardozi artists are often found lacking in contemporary business practices such as innovation, time line guided deliveries, looking for new opportunities etc.

The State Government, in this case, should provide training and necessary infrastructure for them to understand the business dynamics vis-a-vis their perspectives as well as try to inculcate healthy professional practices among them. This might not only motivate them to bring improvement in their work process, who knows we might also witness fabulous innovations in the design and quality parameters.

Also, as we speak of training and upgrading work processes of Zardozi artisans, we also need to review the remuneration amounts and other amenities as per the current industry standards.

Considering the fact that Zardozi currently finds itself as the most desirable piece of ownership in the ethnic fashion circle for women all around the world, it will be real irony and grave injustice to ignore the hands that produce such a beautiful craft. Read about Exquisite Chikankari of Lucknow