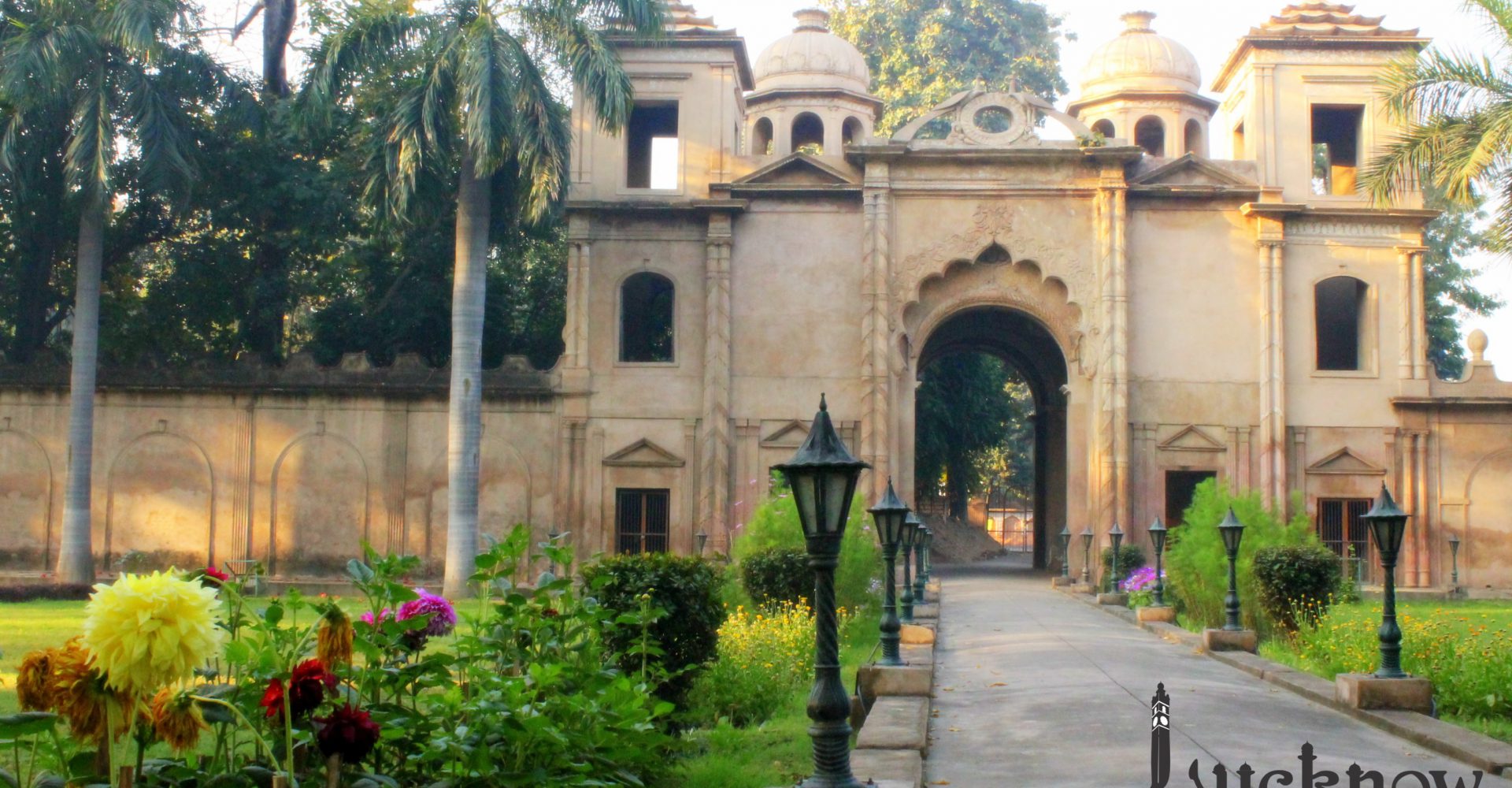 Hazratganj can be said to be the heart of the city with most shopping destinations  around,  some of the prestigious educational institutions located in the area, and leading business houses carry out their operations from this part of Lucknow. Under normal circumstances, most Lucknowites living in the trans-Gomti area take the road from Nishatganj to Hazratganj almost on a daily basis.

There is nothing unusual about the stretch, mainly consisting of a blend of old and the new architecture that almost the entire old world of Lucknow is made of. Except for the stretch between the Gokhle Marg and Sikander Bagh crossing, which to an observant mind, offers a definitive demarcation between the present and the times gone by. While the contemporary style, well-maintained boundary of the National Botanical Research Institute (NBRI) runs on one side, the other consists of the ruins of a beautiful wall, with delicate floral designs and festoon-like depressions at regular intervals.

This dilapidated boundary wall with one of the three gateways of the original building is all that remains of Sikander Bagh today. This magnificent architectural masterpiece, originally built to serve as a summer dwelling for Nawab Wajid Ali Shah was destroyed by the British after the Mutiny of 1857 as a kind of a punishment for serving as a stronghold of the rebellion against the British Empire.

The massive garden was actually laid in 1800 as an imperial orchard by Nawab Saadat Ali Khan. The orchard was later enhanced under the rule of Nawab Wajid Ali Shah. The lovely garden comprises a small marquee, which was possibly the site of countless mesmerizing performances of the Kathak dancers, Raas Leelas, mehfils and ghazals. Nawab Wajid Ali Shah was extremely passionate about ghazals, mehfils and traditional Kathak dance.

Sikander Bagh is a glorious monument enclosed by a beautiful garden and fortified walls with impressive gateways and arches. The name of the monument literally translates to the “Orchard of Sikander”, and the place is believed to have been named after Sikander Mahal Begum, the favorite wife of Nawab Wajid Ali Shah.

Throughout the first war of Indian independence, Sikander Bagh played host to the mutineers and during the siege of Lucknow, the monument witnessed the massacre of more than 2000 Indian rebels. The monument actually stood as the obstruction in the way of the British commanders who were determined to relieve the beleaguered Residency in Lucknow.

After a prolonged struggle, all the mutineers were massacred ruthlessly by the British troops. It is said that only the British dead were removed and buried after the assault on the Sikander Bagh and the bodies of the Indian rebels were left as it is within the palace compound.

The entrance to Sikander Bagh has a unique “pair of fish” design typical of the Nawabs. The monument has a peculiar, hybrid resonance that has distinctive features of Chinese, European and Persian architectural brilliance in the form of pediments, arches, domes, pagodas and Corinthian pillars assembled at one place.

The Sikander Bagh complex is said to have housed a summer palace, a wooden pavilion and a small mosque. The palace, in its glory, boasted of three towering gateways on three sides, only one of which now remains. Some delicate art-work can be witnessed on the edges, below the pagodas, and chhattries.

Nawab Wajid Ali Shah specifically bestowed a khillat and offered a robe of honor to his favorite painter Kashi Ram after the completion of the monument. Whatever little that remains of the Sikander Bagh in the present times, also houses some magnificent frescos with delicate floral designs similar to the renowned Chikan embroidery of Lucknow, believed to have been done by the Nawabi painter, Kashi Ram.

A visit to Sikander Bagh is sure to take you back in time to the times when the Indian sepoys left no stone unturned to make the rebellion of 1857 a success. Strolling in the palace compound, you can actually imagine the places where the dead bodies would have been scattered, the walls where gun shots would have echoed and gates which British armies would have infiltrated. Do visit, the Sikander Bagh to transport yourself back in time and share the emotions of the Indian mutineers who fought hard for our independence.