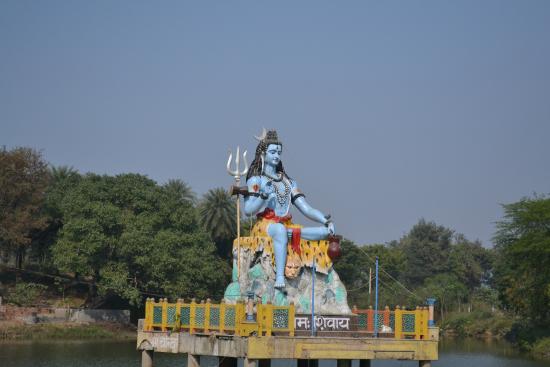 The Nawabs gave a distinct image to the city, which indeed is unique in itself and full of secular monuments of incomparable excellence. On the one hand, the city landscape boasts of some of the most beautiful mosques of north India, on the other, it is home to some famous temples too.

The famous Chandrika Devi temple is situated on the banks of river Gomti on the Lucknow – Sitapur road, 28 kms from the main city of Lucknow.This renowned temple is said to be  300 years old and is a must have on your itinerary on your next visit to the city of Nawabs, Lucknow. Also known as the ‘’Mahi Sagar Teerth’’, this temple is considered to be one of the eight holy seats devoted to Goddess Durga.

The temple is well connected to Lucknow by road and offers you the much needed relief from the din of the everyday life. The Chandrika Devi temple attracts visitors in big numbers throughout the year, especially in Amavasya during Navratras owing to its religious significance since times immemorial.

The fair around the temple complex—has make-shift shops selling sweets and other objects of regular use such as bangles, eatables and medicinal herbs—that is organized in Amavasya and during Navratras in the temple premises turns out to be a big crowd-puller.

This temple has the idol of Goddess Chandrika Devi in the shape of a rock with three heads. There are several legends associated with the construction of the temple, one of them being that Rajkumar Chandraketu, the elder son of Lord Lakshman was once passing by the river Gomti on his Ashwamegh horse. On the way, it got dark, hence he had to take rest in the then forested area. He prayed to the Goddess for safety. In a moment moonlight dawned and the Goddess appeared before him and assured him.

Later on, a grand temple was constructed at this place, which is believed to have been ruined by the foreign invaders in the twelfth century. It is also believed that about 250 years ago, some passers-by moving through the forested area came upon this sacred place where they found the idol of Goddess Chandrika Devi. Sometime later, the temple was constructed at this place and since then, natives as well as tourists throng this temple throughout the year.

According to another myth, it is said that during the ‘Dwapar Yuga’, Lord Krishna informed Barbreek, the son of Ghatotkach about this holy place for acquiring power. Thus, Barbreek worshipped Goddess Chandrika Devi continuously for three years at this place. It is also believed that around two centuries back, this temple was not in the knowledge of anyone, as the entire stretch was forested. It was then that the landlord of a nearby village saw Goddess Chandrika Devi in his dreams and decided to construct a temple there with the tradition of organizing fairs on every ‘Amavasya’ which continues even today.

During the Amavasya and the Navratras, a lot of spiritual activities such as ‘kirtans’ and religious discourses are hosted in the temple and within its precincts when the devotees visit this place from different parts of the state to perform yagya and other auspicious events.

This holy temple, in the vicinity of Lucknow, is the most preferred and ideal retreat, whenever you plan a visit to the city of Nawabs; a visit you will always look forward to and cherish, owing to its serenity and the solace it offers you.оптимизация сайтов Read about the Famous Temples of Lucknow