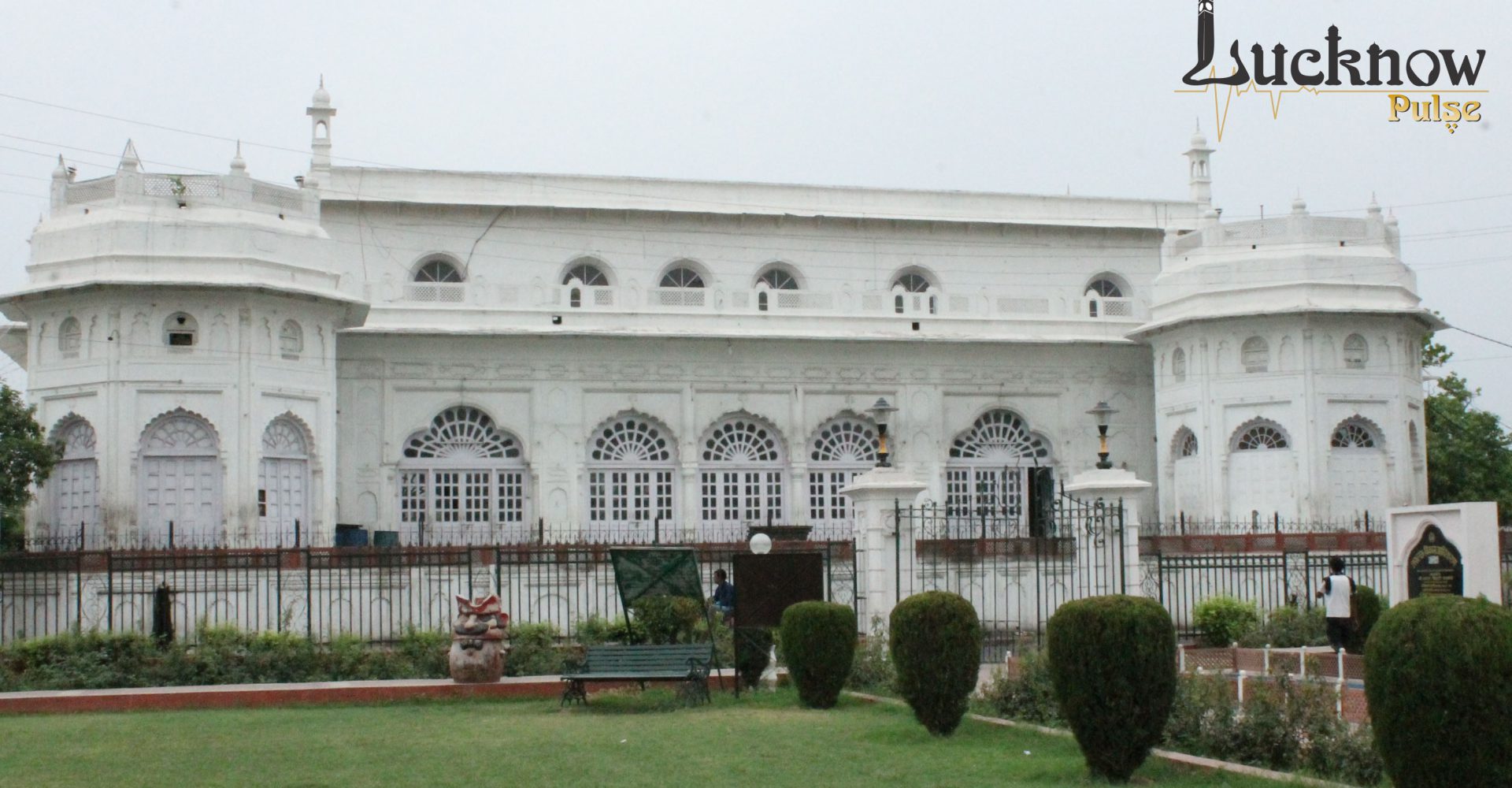 It doesn’t come as a surprise to Lucknowites if they say that there is a wedding being solemnized at some venue in Kaiserbagh and pat comes the question – “Is it at the Safed Baradari?” Such is the fascination for the magnificent white structure that stands tall among the other historical monuments in the Kaiserbagh area of Lucknow city.

Little do most people know that the monument that plays host to weddings, festivals and receptions these days was actually built as a “palace for mourning” during the times of the Nawabs. Passing by the Kaiserbagh area of the city, you can be out for a visual treat including historical monuments to the likes of Ameer-ud-Daulah Library, Begum Hazrat Mahal Mausoleum, Lal Baradari and Safed Baradari to name a few.

Housed between the Eastern and Western gates of the Kaiserbagh complex, lies the Safed Baradari, an elegant building built during the reign of the Nawabs of Lucknow. The monument exudes subtle old world charm and continues to attract visitors from across the globe.

Safed Baradari was built by the last Nawab of Awadh, Wajid Ali Shah in 1854. The monument was also called Qasr-ul-Aza signifying a sacred place of mourning. Nawab Wajid Ali Shah built the monument in the shape of an Imambara for observing sacred azadaari (mourning) in the remembrance of the martyrdom of Hazrat Hussain. The Nawabs of Lucknow used to organize huge azadaaris at Safed Baradari, where people held alams (banners) and taazia for the commemoration of Hazrat Hussain. A holy zakir (pastor) used to sit on a mimbar (raised platform) for addressing the majlis (congregation for mourning) held inside the monument.

According to some distinguished historians, during the reign of Nawab Wajid Ali Shah, one pious person Syed Mehdi Hasan, once upon returning from his pilgrimage to Karbala in Iraq, brought a zarih (relic of the mausoleum of Hazrat Hussain) that was made from the sacred Khaak-e-Shilfa (the soil taken from where the martyrdom of Hazrat Hussain took place). This zarih or relic was believed to have some healing properties and was initially kept at Karbala Dayanat-ud-Daulah.

When Nawab Wajid Ali Shah got to know about the relic he went with his nobles to pay reverence in the honor of Hazrat Hussain in black clothes as a mark of mourning.

Later, Nawab Wajid Ali Shah ordered his nobles to carry the zarih in a royal parade towards the Safed Baradari. He told the nobles that the sacred relic will now be kept at the Safed Baradari for the purpose of mourning. Nawab Wajid Ali Shah also bestowed the title of khillat (robe of honour) upon Syed Mehdi Hasan and awarded him with cash rewards.

After the capture of Awadh by the British troops in 1856, the Safed Baradari was utilized as a court to settle legal claims and petitions filed by the nobles, relatives and acquaintances of the Nawabs of Awadh. During the Uprising of 1857, the monument was used by freedom fighters as a meeting point to devise military strategies in order to attack the British troops. Begum Hazrat Mahal, the wife of Nawab Wajid Ali Shah occupied the entire area of Kaiserbagh, including Safed Baradari as a refuge for military revolt against the British troops.

The Current State of Safed Baradari

Safed Baradari continues to exude the same Nawabi era splendor. The rich architecture displays the warmth and magnificence of Nawabi period. The Government and local authorities have done well to preserve the past glory and architectural brilliance of the monument. The architectural perfection and the rich past of the monument have fascinated many prominent film makers to shoot their period films such as UmraoJaan, Shatranj ke Khiladi, Junoon and Gadar, and even latest Bollywood flicks such as Tanu Weds Manu, Ishaqzaade and Bullet Raja at the Safed Baradari. Today, various art and craft exhibitions, workshops and even weddings are organized at the monument.

You may want to visit the monument to get a feel of the Mughal, British, Persian and French inspired architectural brilliance imbibed in the monument.