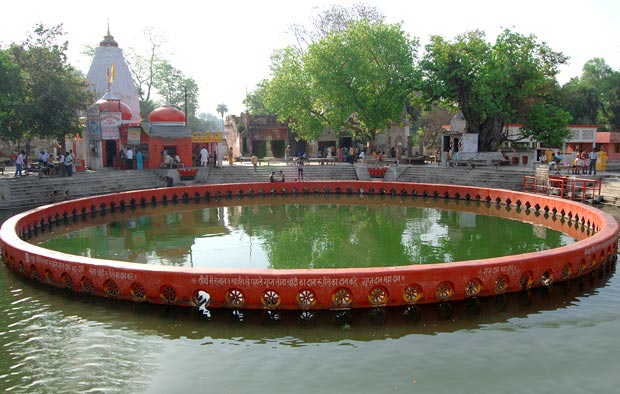 Lucknow city has a history of Mughal and Nawabi dominance which was predominantly Muslim. It is interesting to note that the Nawabs of Awadh too, followed the style of Akbar, the secular Mughal King, to place their trust in the Hindus for a solid foundation to their empire. The Nawabs are said to have raised and patronised many Hindus to positions of authority.

The secular Nawabi influence has helped Lucknowites to imbibe values of love and acceptance for people of all religions and faith. It might be for the same reason that the people of Lucknow revel in the festivities of all major festivals of all religions with equal enthusiasm.

On the one hand, Lucknow boasts of some of the most splendid mosques of Northern India, on the other, it houses some of the lesser known but very sacred Hindu landmarks. One such destination, on the Lucknow-Sitapur highway, is the Naimisharanya.

The sacred place of Naimisharanya is located at a distance of 100 km from the city of Nawabs. The place is easily accessible as both government and private buses ply on the route at regular intervals, for the convenience of the visitors and local commuters.

The history of Naimisharanya, as per the Vedic scriptures refers to the prehistoric times when the sages requested Lord Brahma to pinpoint a place which is devoid of the influence of ‘’Kali Yuga’’ and where worship bears fruits. Lord Brahma is believed to have produced a disc from his heart and thrown it in the air stating that ‘’wherever the nami or center of the disc lands, that location will be known as a holy and fast result-yielding place’’. Since Nami landed here, this place is famous as Naimisharanya.

Naimisharanya holds religious significance since the ancient times of Satya Yuga, as being the place where many sages have undertaken penance. According to a fable in the epic ‘’Mahabharata’’, Naimisharanya is the abode of all the sacred places on this earth and your visit to this place is equivalent to your visit to all the holy places. In the earlier Indian scriptures, Naimisharanya has been referred to as the place where you get rid of your sins and also attain liberation; hence it is witness to a large number of visitors thronging the place all round the year.  It is also widely known as ‘’Naimish’’or ‘’Neemsaar’’.

Chakra Teerth: According to the Mahapuranas, Chakra Teerth was created by the center of the disc, produced from Lord Brahma’s heart. It holds great religious relevance as taking a dip in the holy water is believed to rid you of all your past sins; an experience you cannot afford to miss.

Lalitha Devi: As stated in one of the Puranas, a legend goes that after Sathi Devi burnt herself in the Yoga Agni after Daksh Yajna, Lord Shiva carried her body on his shoulders and performed ‘Tandav’. This is said to have affected the creation of the universe; hence Lord Vishnu divided Sathi’s body into 108 parts. The body part that is presumed to have landed in Naimisharanya is Sathi Devi’s heart, and is also one of the Shakti peeths known as ‘Lingadhaarinee Lalitha Devi’.

Vyaas Gaddi: This is referred to as the holy place where the sage Ved Vyas divided Vedas into four volumes and also wrote Puranas. He also imparted this knowledge to his chief apostles with the mission of spreading this light of knowledge to the world.

Suth Gaddi: This place is of religious significance as the renowned sage Suth is said to have given discourses to Shounakalong with 88,000 other sages.

Hanumaan Gaddi and Pandav Kila: According to the Mythology, Lord Rama and his younger brother Lakshmana were made captives by Ahiraavan, who, in turn took them to Patalpuri, during the battle that ensued between Lord Ram and Ravana. Lord Hanuman killed Ahiraavan, and placing Lord Rama and his brother Lakshmana on his shoulders, travelled towards South. This is why Lord Hanuman’s idol is placed, facing southwards.

Pandav Kila is referred to the place where the Pandavas practiced penance for twelve years after the culmination of the Mahabharata war.

Dasaashvmegh Ghaat: You must see this ghat as Lord Ram is said to have performed the tenth Ashvamedha yagya at this place according to a legend. Here, inside the temple the idols of Lord Ram, Lakshmana and Goddess Sita are kept along with the idol of Lord Shiva, popularly known as Siddheshwar Mahadeva.

Dadheechi Kund: According to the religious scriptures, Lord Indra asked Saint Dadheechi for his bones to carve a weapon out of it for killing the demon Vritta Asur. Saint Dadheechi gave in to the request as it entailed people’s well-being, but only after his last wish of visiting all the sacred places and taking a dip in all the holy rivers of India was fulfilled. Since this would take up a lot of time, and the demon would wreak havoc, all the holy places and rivers were invited at this very place. The holy waters from all the sacred rivers were mixed, hence this place is also known as Misrit Teerth. Thus, taking a dip in the hoy waters is considered equivalent to taking a bath in all the holy rivers of India.

Naimisharanya, packed with divinity and spirituality, must be high on your list of ideal retreats away from the hustle and bustle of everyday life, on your visit to Lucknow. You can drive down to this place to enjoy the calmness and serenity that it offers you.реклама с пандой