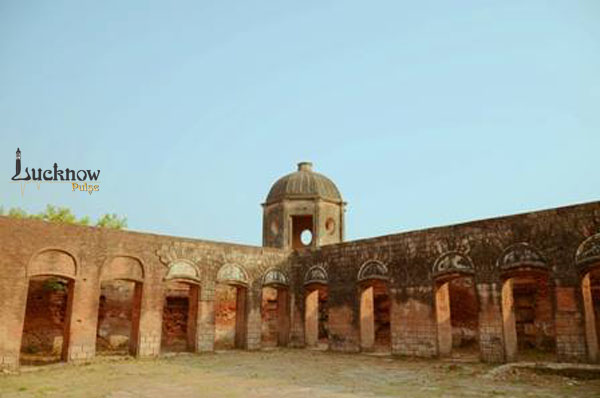 Lucknow is a splendid historical city that boasts of marvelous monuments, gardens and parks. The historical monuments were mostly built during the reign of the Nawabs of Awadh and the British Raj. The monuments of the city portray a symbolic aura of the rich Nawabi era. The likes of Bada Imambara, Chhota Imambara and Roomi Darwaza to name a few are the prominent hallmarks of the glorious Nawabi period that went on to give a unique identity to Lucknow, the city of Nawabs.

The evenings of Lucknow have always been popular due to the presence of numerous beautiful parks and gardens. The unique title “Shaam-e- Avadh”, finds its origin in the love of the Nawabs to spend their leisurely evening time in baghs (gardens or parks). This might also be the reason why quite a few localities in the city are named with suffix “bagh” such as Dalibagh, Charbagh, Alambagh, Sikanderbagh, Khurshidbagh and Musa Bagh to name a few.

One such place of great historical significance located at the west end of Lucknow is Musa Bagh. It is a very picturesque location with green fertile fields and forest and has an impressive Indo-European style monument that witnessed the great Uprising of 1857.

The 5th Nawab of the Province of Awadh, Nawab Saadat Ali Khan built a beautiful kothi (palace) at the picturesque Musa Bagh on the banks of the river Gomti. The kothi incorporated subtle French architectural inputs and featured big attractive gardens.

Musa Bagh Kothi was developed during the reign of Nawab Saadat Ali Khan for leisure and recreational activities. The kothi was built under the supervision of the Nawab’s close confidant Aazam-ud-Daulah. The Nawabs and foreign dignitaries, mostly Europeans, used the place for leisure, to enjoy the fights between animals such as rhinos, elephants, tigers and wild buffalos at the Musa Bagh.

Nawab Ghazi-ud-Din Haider and his son Naseer-ud-Din Haider offered Musa Bagh to the British as an alternative site to the Residency but the British administration refused the offer. Later, the British expelled the rulers of their property with the help of an illegal annexation.

The Musa Bagh Kothi had earthenware conduits that were attached to the vents on the flat rooftop. This unique architectural arrangement was made inside the kothi to facilitate proper ventilation and cooling, particularly during the hot summer days. The moist earth surrounding the kothi being close to Gomti River provided additional cooling during the summer season. The kothi also had a beautiful semi-circular porch opening to the view of the Gomti River.

The place was also the strong citadel of Prince Birjis Qadr and Begum Hazrat Mahal during the Uprising of 1857. The kothi was attacked by the British troops under the leadership of General Outram. Nearly, five hundred mutineers were killed and all their arms and ammunition were captured at Musa Bagh.

Strangely enough, the Uprising of 1857 both started and concluded at the Musa Bagh. During the rebellion, the 7th Awadh Irregular Cavalry was based at Musa Bagh. According to some historical narrations, some soldiers of the 7th Awadh Irregular Cavalry refused to bite the cartridges sealed with cows’ fat citing religious reasons. Sir Henry Lawrence is said to have ordered that all their arms be confiscated if the soldiers refused to use these cartridges. Events began to unfold at the Musa Bagh after this incident.

During the struggle of Uprising of 1857 at Musa Bagh, Captain Wales of the British Regiment was fatally injured and died on 21st March 1858. He is buried within the premises of Musa Bagh Kothi and an enclosure is made for his mazar (grave). As an act of reverence or religious myth, local people offer wine, meat and even cigarettes on the mazar of Captain Wales when their personal wishes are fulfilled.

Musa Bagh is located 5 kms away from the hub of Chowk Koneshwar on Lucknow-Hardoi Highway. The structure of Musa Bagh Kothi is in ruins at the moment. Two big sections with domed roof and a roofless structure that is sunk beneath the ground can be seen at the sight. The striking architectural features of the ruins are helpful in providing a faint picture of the monument in its glory days. The architectural remains of the monument depict four floors in one portion and two separate floors in another portion.