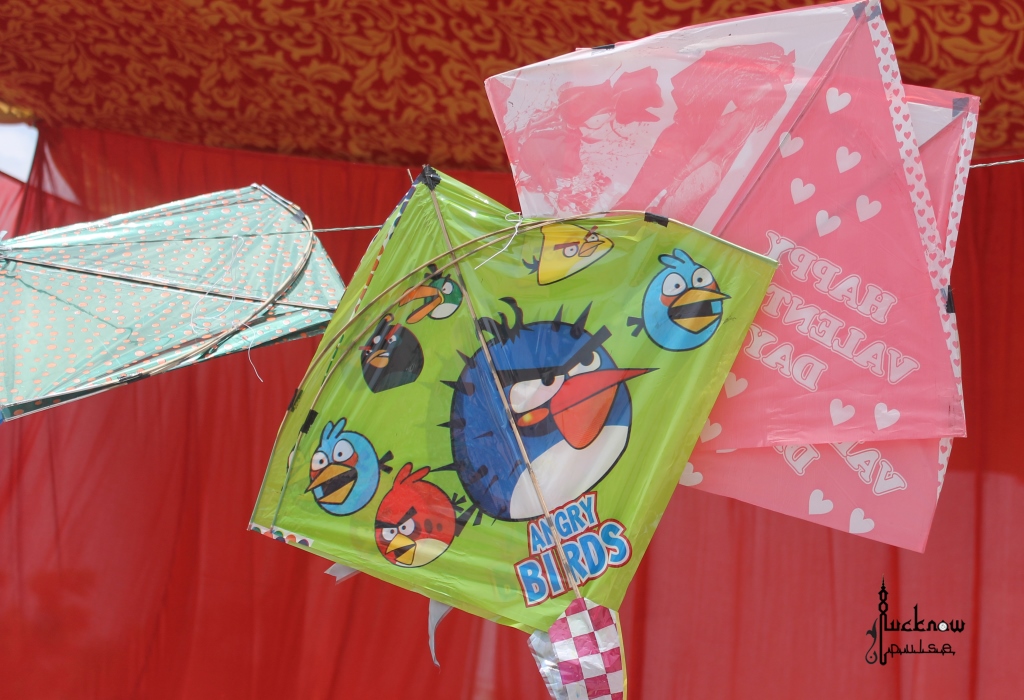 With no televisions, internet, and video games for leisure, the people of Lucknow are believed to have indulged in kite flying, cock fighting, shatranj (chess) and kancha (marbles) as common pastimes during the days of the Nawabs. The charm of these activities is still alive in the hearts of proud Lakhnawis who seem to be highly influenced by the Nawabs and their lifestyle practices.

Patangbazi (kite flying) is the most common and popular leisure activity practiced in the old areas of Lucknow, especially Chowk, Aminabad, Nakhas, Saadatganj, Moulvigang and Kaisarbagh. This recreational activity is actually a fulltime recreation for several people in the city, who spend the most part of their day at the banks of the Gomti or their rooftops flying various types of colorful kites.

Every year, one particular day is devoted to extensive kite flying, a special day when kite-flying enthusiasts of the city take part in various Patangbazi competitions on the banks of the river Gomti. This day falls on the next day of Diwali and is known as Jamghat. Extensive preparations are made by people from all age groups before Jamghat. It is a very special occasion where people of different religions and castes come together on one platform and take active part in various Patangbazi (Kite flying) competitions.

Jamghat festival also symbolizes the renowned Ganga-Jamuni Tehzeeb of Lucknow where Hindus and Muslims come together, exchange sweets and fly kites. Jamghat is a one of its kind event, which maintains harmony and a social relationship between the Hindus and Muslims of Lucknow. The active participation of Muslims and Hindus during Jamghat with equal enthusiasm displays the real essence of Tehzeeb and brotherhood unique to Lucknow city.

The Nawabs used to fly their kites made of gold or silver. They also utilized gold-polished manjha and charkhi. Whoever brought back the kati patang of the Nawabs was handsomely awarded. There were two different styles of kite flying during the Nawabi period. People used to engage in Pench Ladana (cutting the manjha of the opponent’s kite) through “Kheench Ke” technique (fast pulling of the kite) or “Dheel de Ke” method (slow release of the manjha). These two popular styles of kite flying are still widely employed by the kite flyers today.

Kite Flying Lingo and Accessories used during the Jamghat

There are different types of kites flown in Lucknow during Jamghat. Kankawwa is considered to be the biggest kite made from a full sheet of paper. This kite had its origin during the reign of Nawabs. Experienced kite flyers tend to use Kankawwa during the Jamghat festival. Pauntawa kite is produced from 3/4th portion of a sheet of paper.

Pauntai kite is produced from a left-over portion of Pauntawa. Kids and teenagers are very fond of Pauntai kites. Sava ka Teen kites are actually three kites made from 3/4th part of paper. Chichi is generally a small kite with a tail at the base and it has a thin wooden spine of 7-8 inches.

Phirki or Charkhi is used to assemble manjha. It is generally a wooden spindle utilized to collect the thread. Manjha is a sharp thread attached to the kite in order to cut other kites. Saddi is a normal thread without any sharpness used to fly kites. Kanne is an arrangement of saddi or thread attached to the thin spine of the kite that is fixed with the main chord in order to make it fly. Taar ki Patang is also used to trap or entangle a kite that has been cut by other kite flyers. Taar is essentially a very thin piece of metal intertwined with other taars at many ends to make a set-up to catch kites.

Kite flying is said to have been introduced to India by Chinese travelers Fa Hein and Huien Tsang. It is considered an art by many people in Lucknow. That legacy was carried through the reign of Nawabs and today scores of Lucknowites spend massive amount of time and money on this pastime. Kite making requires detailed precision and skills and patangbaz shaukeens have patronized this dying art. The fascination of Pench Ladana, Kheech Ke and Dheel de Ke still persists in Lucknow and would never fade going by the love for heritage ingrained in the hearts of Lucknowites.раскрутка в социальных сетях бесплатно