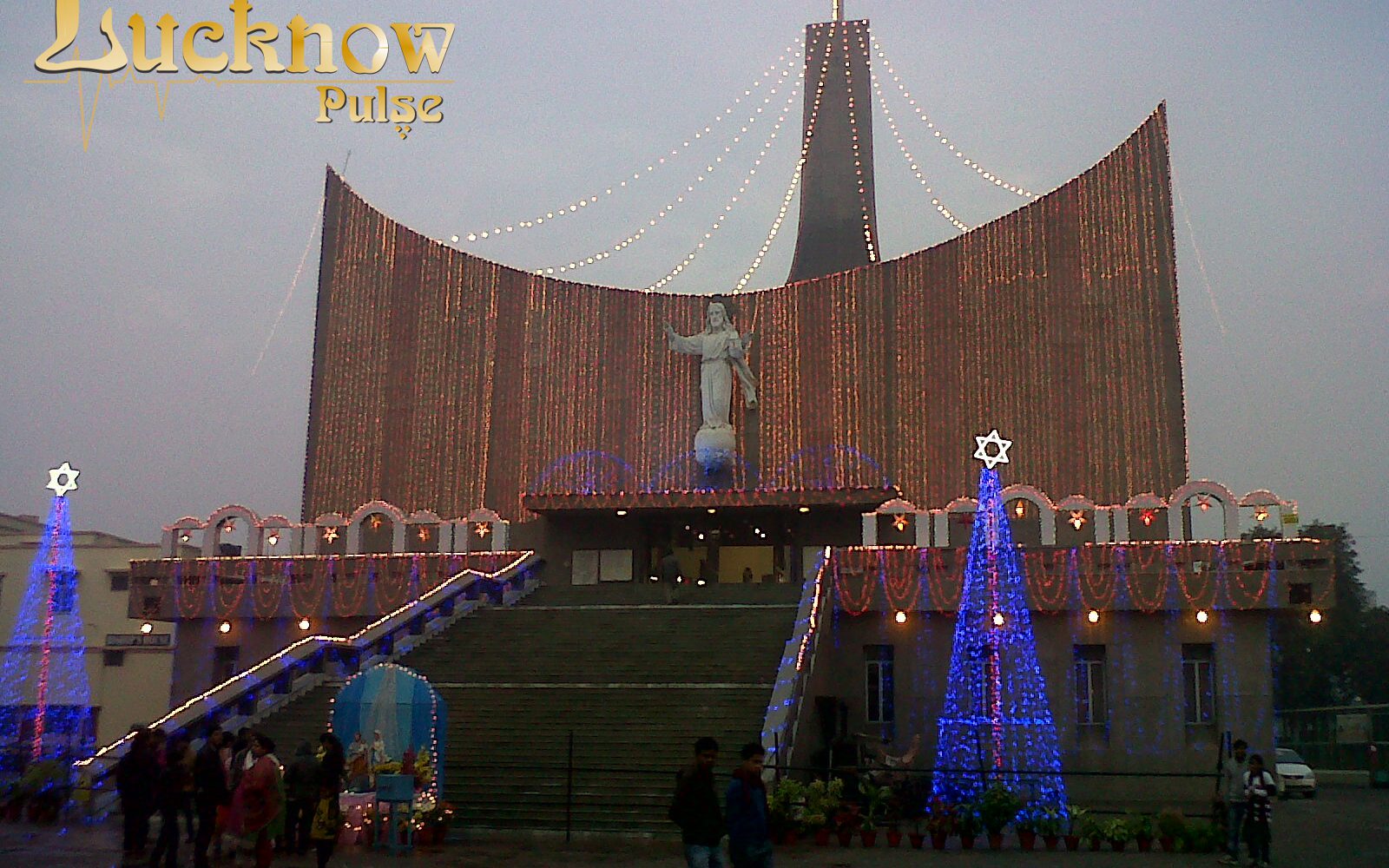 Lucknow has some of the finest churches from the British period while the Nawabs of Lucknow also cared for the Christian population of the city. Keeping with the secular tradition and culture of city, it is not surprising that Christmas celebrations  are grand in Lucknow with all the churches decked and glittering with lights on the big festival.

According to a story in the New Testament associated with the birth of Lord Jesus Christ, God had sent an Angel called Gabriel to Mary, a virgin, to foretell her that she would give birth to a son who must be named Jesus. Jesus, the son of Mary, was born in Bethlehem as a saviour and his birth is celebrated to this day, across the world.

Celebrations at the Cathedral, Lucknow

Every year, the stately St. Joseph Cathedral, located in the heart of the city amidst the busy streets of Hazratganj is brightly lit-up, mesmerizing the visitors with its spectacular grandeur. To add to the glory, the St. Joseph Cathedral holds an exhibition of nativity scenes showing the various events marking the birth of Jesus Christ through beautifully-crafted tableaus.

The scenes depict the main characters involved in the whole event related to the birth of Jesus Christ and usually include Mother Mary, Joseph, Baby Jesus, the three kings, the Shepherds, Sheep and a Cow. Apart from these colourful statues, the exhibition also includes several posters and paintings throwing light on the miracles performed by Jesus Christ, symbolising the power of God in our daily lives. The Christmas festivities at St. Joseph Cathedral are surely not to be missed especially when a large number of Lucknowites enjoy the revelry and merriment that is followed by the beginning of a new gregorian calendar year.

On the Christmas Day, the celebrations in the St. Joseph Cathedral commence with a mass that is organized in the morning and is attended by a large gathering of people. In the evening, a meeting is usually convened with the senior citizens in the St. Joseph Cathedral as a part of the Christmas day celebrations. The celebrations continue over the days following Christmas with various events being organized at the Cathedral, attended by the notable members of the Christian community at large and the dignitaries of the city.

The week-long celebrations hosted by St. Joseph Cathedral also include singing Christmas carols, dance drama, feast of Holy family, thanksgiving service, adoration to the Blessed Sacrament followed by a holy mass on the December 31 and culmination of the events with Solemnity of Mother of God and a Holy mass in Hindi and English on January 1.

The city loves to revel in the past glory of its Nawabs as well as participate in the annual Christmas celebrations that give the residents a reason to participate in the festivities eliminating the boundaries of religion, caste and creed. Do not miss out on the glorious festivities at the Christmas celebrations at the St. Joseph Cathedral in Lucknow, the city of Nawabs.