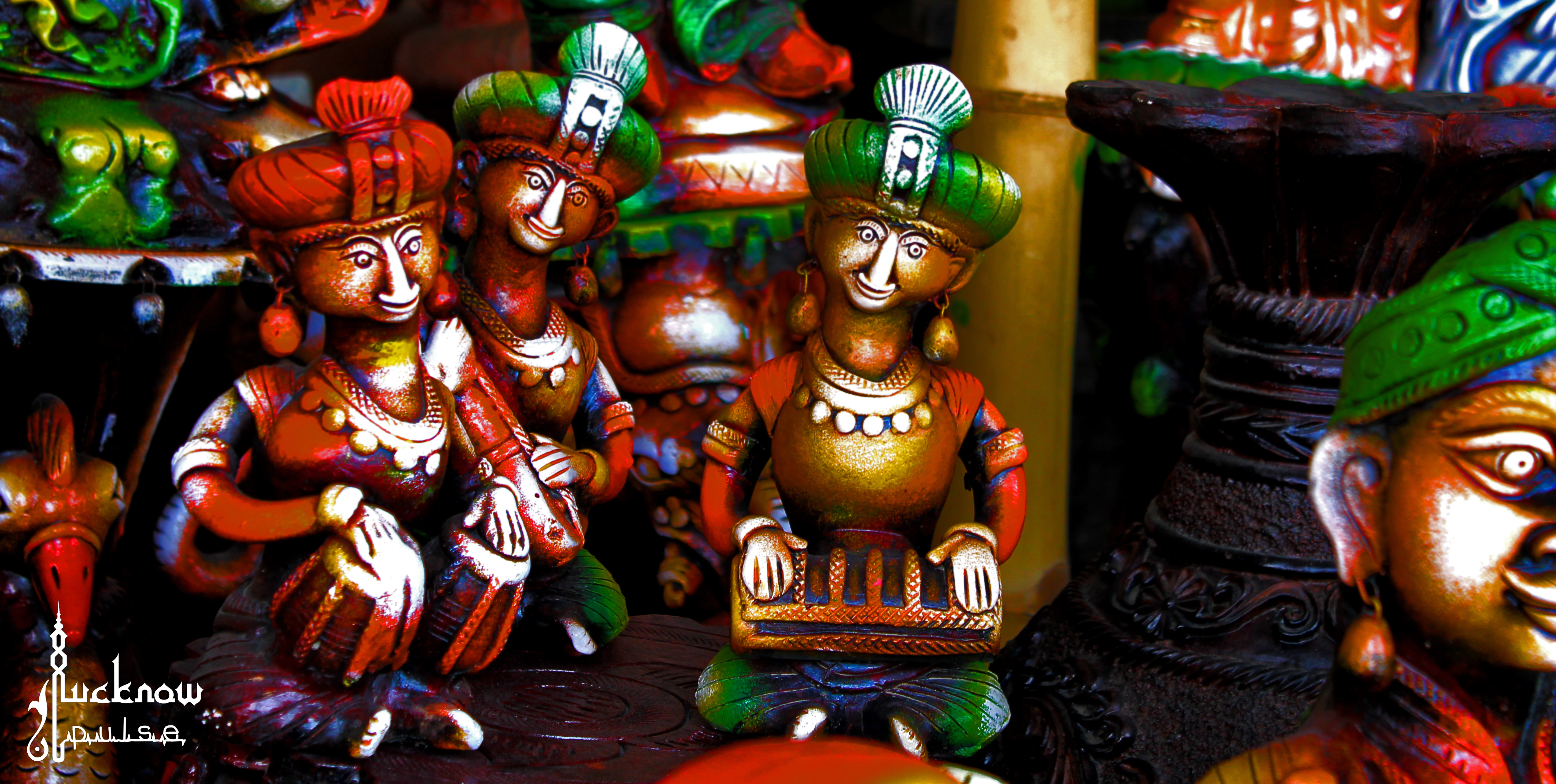 In India, pottery making is an art common to almost every part of the country. Every state has its own unique art of pottery making be it the “Blue Pottery” of Rajasthan, the “Terracotta” of Madhya Pradesh or the “Chinhat Pottery” of Uttar Pradesh. Every form of pottery is uniquely creative and unequivocally beautiful as it involves great deal of art, skill and craft of the potter who gives exquisite shapes and designs to a mere handful of clay.

Lucknow city, famous for its rich culture and heritage, has another creative dimension to it in the form of Chinhat pottery. The form of pottery, named after the place where it is mainly practised, has added to the already rich pool of indigenous and ingenious craft of the city.

Chinhat Pottery is mainly done in the Chinhat area which lies at the eastern outskirts of the Lucknow city, on Faizabad Road. The place has emerged as a famous hub for pottery in the Uttar Pradesh state, and has attracted tourists as well. Chinhat pottery is a beautiful and creative art of handicraft that has life added at the hands of the native potters skilled in the art of pottery-making.

Lucknow and the Chinhat Pottery

The city of Nawabs has been the centre of art and craft since ages. Lucknow city carries a rich legacy of creativity and culture behind. Right from chikankari and zardozi, to pottery-making, Lucknow has been a thriving ground for the local skill and craftsmanship.

Lucknow has a long standing history of pottery-making since the time it was ruled by the Mughals and Nawabs. The basic form of pottery-making in the city was all about the coating of the bases of the tanks with clay, which went on to include the making of colourful figures of different races on these tanks. It also involved carving of fruits of clay, a form of pottery that is still prevalent at large, in the city.

With the origination of the craft at Chinhat, the art of pottery-making in Lucknow thrived and still continues to serve as a source of bread and butter for a large number of potters. In fact, the close proximity of Lucknow helps in acting as a good market for the finished products. Pottery-making emerged as a lucrative industry with the recent trend of using pottery for beautification of landscapes in hospitality industry and house interiors too. However, today, the once prosperous trade looks desperate for an immediate overhaul and stimulus for better future of both the potters and the business as a whole.

How it all started in Chinhat?

Chinhat used to be a small hamlet on the outskirts of Lucknow, along the Lucknow- Barabanki road. Chinhat gained popularity due to the commencement of pottery-making industry 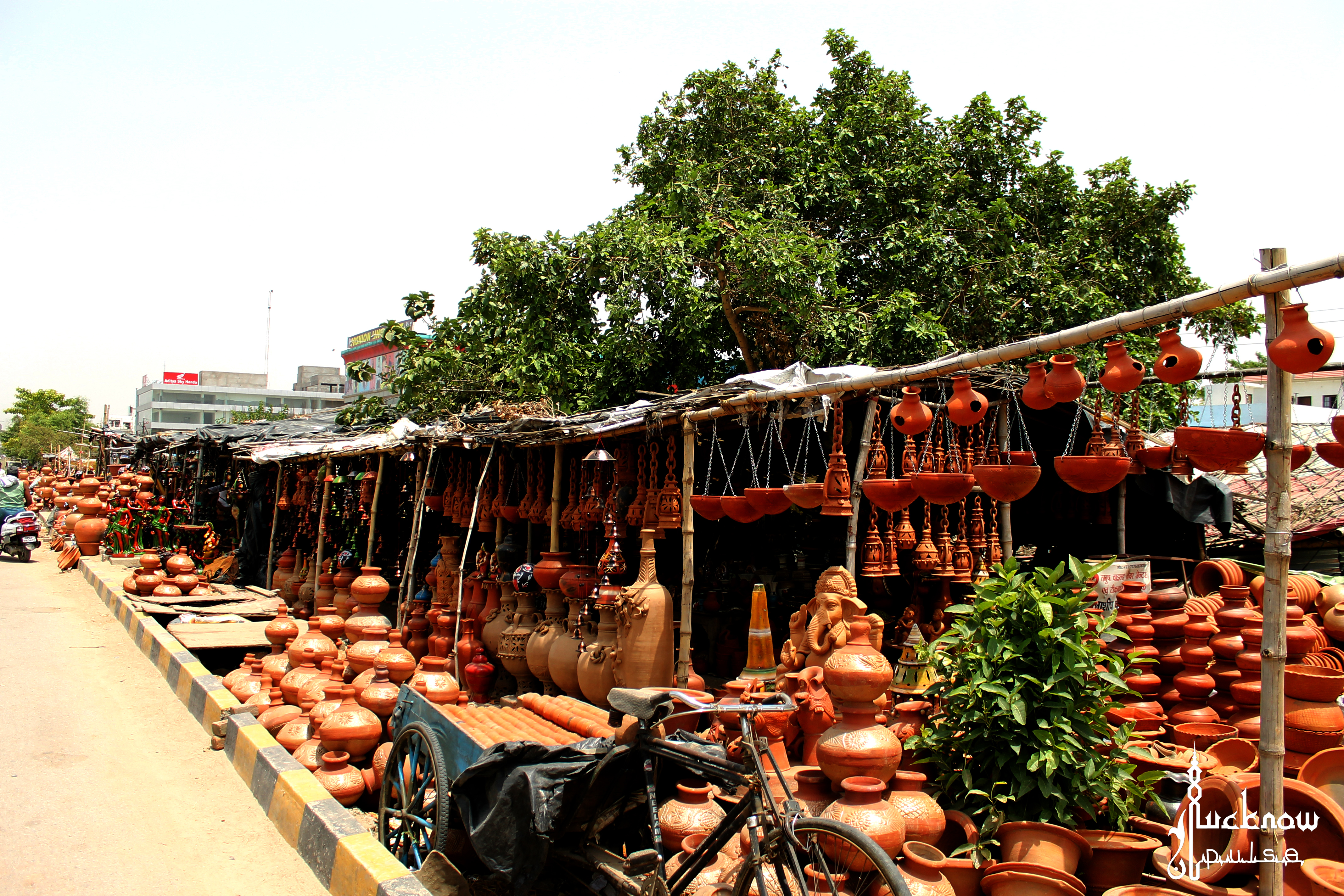 that helped the village secure an important position as a pottery-making hub in the state.

The craft of pottery making is very old and started with the pilot project that was launched by the Planning Research and Action Institute (PRAI) of the State Planning Department. The pilot project was launched in the year 1957 with a two-fold objective of training the unemployed youth of the area in pottery making and to establish small units to be managed and controlled by the learners themselves. The local people of Chinhat saw potential of making it big and profitable in the field of pottery-making with the help of this project. The institute received 5000 applications and soon the efforts started bearing fruits of success. The products were received well both in the national and international market.

What all they make?

Chinhat pottery comes under the category of Glazed Terracotta pottery and Ceramics. The pottery has a rustic look to it and carries an earthen appearance. The glazes are usually green and brown-coloured while the designs are put on the usual white and cream bases. The firing of the Chinhat pottery is done at 1180 to 1200 celsius. The products include mugs, bowls, vases, cups and saucers. The blue on white, toy tea-sets from Chinhat are also very popular apart from the mugs, flower vases, and the leaf-shaped plates. The designs are at times in geometric shapes and the final products are beautiful pieces of creativity, skill and hard work put together by the potters of Chinhat. 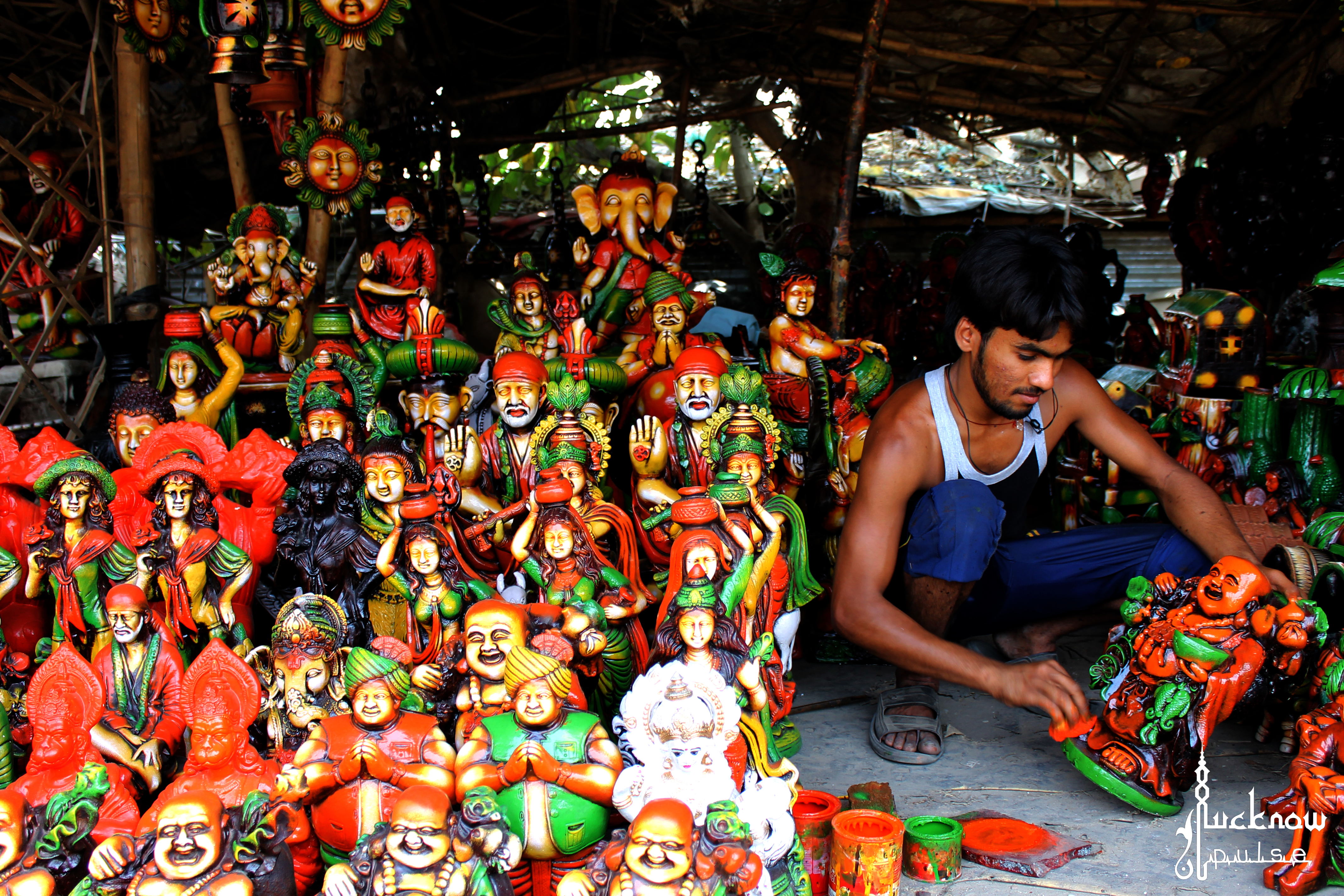 For potters, pottery-making is not just an occupation to earn livelihood, it is their work which they worship. However, the recent spurt in the availability of cheap Chinese products in the markets and ignorance of the authorities has caused trouble for the potters. The industry still has huge potential of turning into a big profitable business for the state. But, efforts need to be stepped up to promote the craft at both national and international levels as it holds a great potential for both Lucknow city as well as the local craftsmen.

Do find a chance to visit the exquisite Chinhat pottery village on your trip to Lucknow to be able to have the real feel of the whole process of pottery-making. You may also indulge in some shopping for your house if you like the pottery art native to Lucknow, the city of Nawabs.

Read more about the land of Nawabs and its speciality