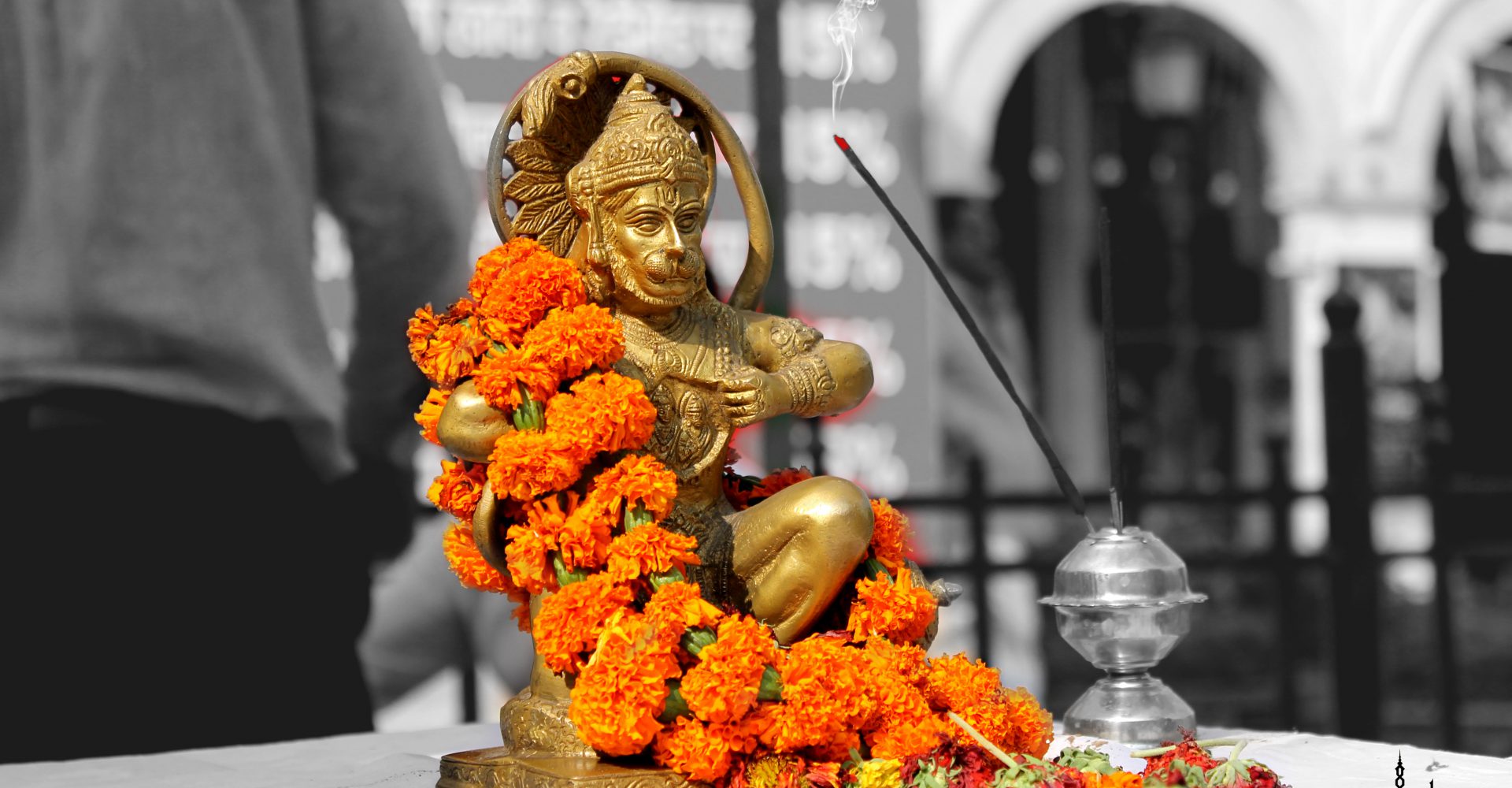 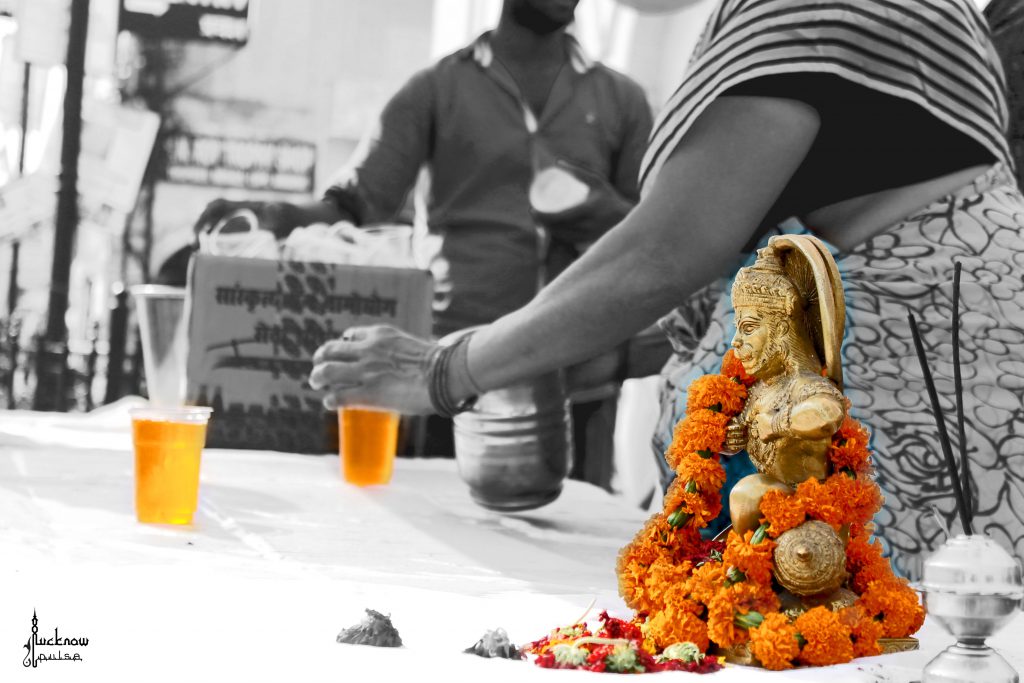 Bada Mangal, devoted to Lord Hanuman is celebrated in the capital city of Uttar Pradesh on every Tuesday of Jyestha month as per the Hindu calendar. It usually coincides with the month of May or June. This time however, Bada Mangal will stretch for two months as it will be spreading over nine Tuesdays instead of the usual four or five.

The festival is a symbolic representation of the Hindu-Muslim communal harmony.

It is said that Begum Janab-e-Alia, second wife of Shuja-ud-Daula, the third Nawab of Awadh, saw a vision of a divine presence commanding her to get a temple, dedicated to Lord Hanuman, constructed. In her vision, she saw a particular site where the idol of the deity was buried. Subsequently, she gave the orders of digging up the specific area and on finding the idol of Lord Hanuman, transported it to the city on an elephant. After covering some distance, the elephant stopped and refused to go any further. The begum got the temple constructed at this site and it came to be known as the ‘Purana Hanuman Mandir’.

Since then, Bada Mangal is celebrated with great fervour in the city of Nawabs.The devotees throng the famous Aliganj Hanuman temple in big numbers to offer prayers to the deity to receive the blessings.

Though, the Aliganj Hanuman temple bears special significance in Bada Mangal celebrations, the devotees visit all the other Hanuman temples in the city to offer prayers. The other famous Hanuman temples in Lucknow include Naya Hanuman Mandir in Aliganj, Hanuman Setu on the University road, and Chachi Kuan temple in Lal Kuan.

The Bada Mangal celebrations are marked by numerous stalls or Bhandaras set up across the streets in different localities of the city serving water, ‘boondi’ as Prasad followed by ‘Aloo Puri’, ‘Sherbet’, ‘halwa’, ‘ice-cream’ and ‘cold drinks’ to the people for free. These stalls are set-up by individuals as well as by private and government organisations. Songs dedicated to the deity are played by the stall owners. 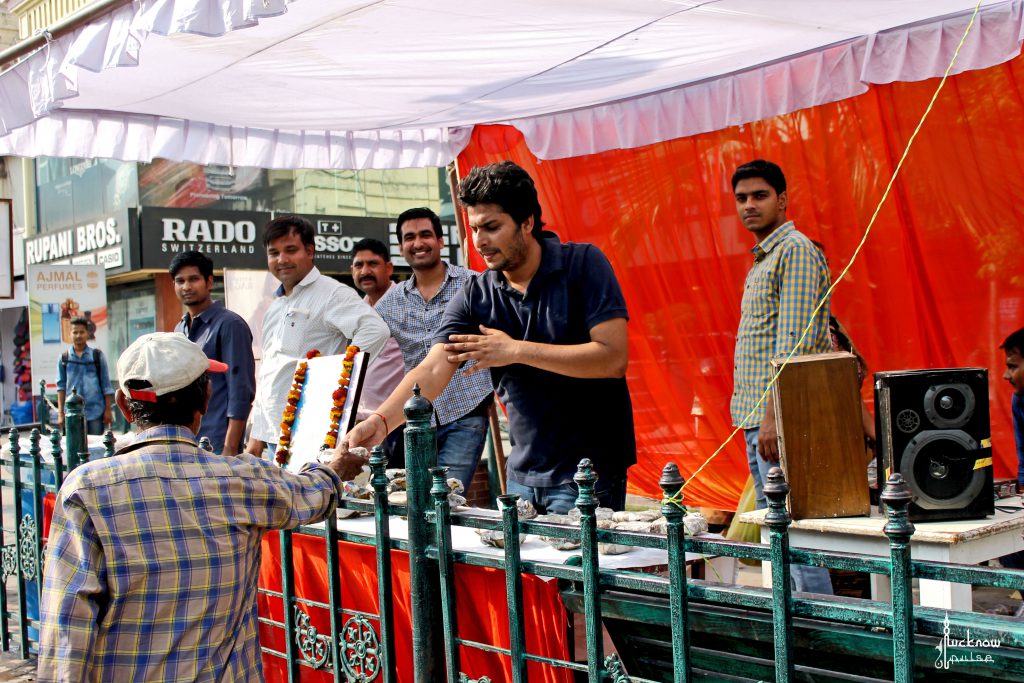 The food for public consumption is prepared in big vessels and cauldrons. Food is laid out on big tables to serve the common public. The happiness of serving water and other food items to the common masses is clearly evident on everyone’s face.

The celebrations start in the morning around 10 and continue till 6 in the evening. Initially it is not difficult to manage the public but during the afternoon hours, the crowd gets unmanageable with individuals, especially the youngsters coming back for multiple servings. However, such acts are taken in good spirits.

Amidst all the celebration, there is one factor that often faces neglect – cleanliness. The sight of litter strewn across the streets becomes quite common the following the day. Hence, as a solution, the Lucknow Nagar Nigam has decided that the organizers will have to inform the LNN beforehand and they will be charged around Rs. 200 – Rs. 500 for maintaining the cleanliness of the space.

Devotees from different towns of Uttar Pradesh as well as other places try to visit the city in this period to be a part of the Bada Mangal celebrations in Lucknow. If you are in the city, you must ensure a visit to the revered Purana Hanuman temple in Aliganj and savour the food items served at the Bada Mangal stalls in Lucknow.