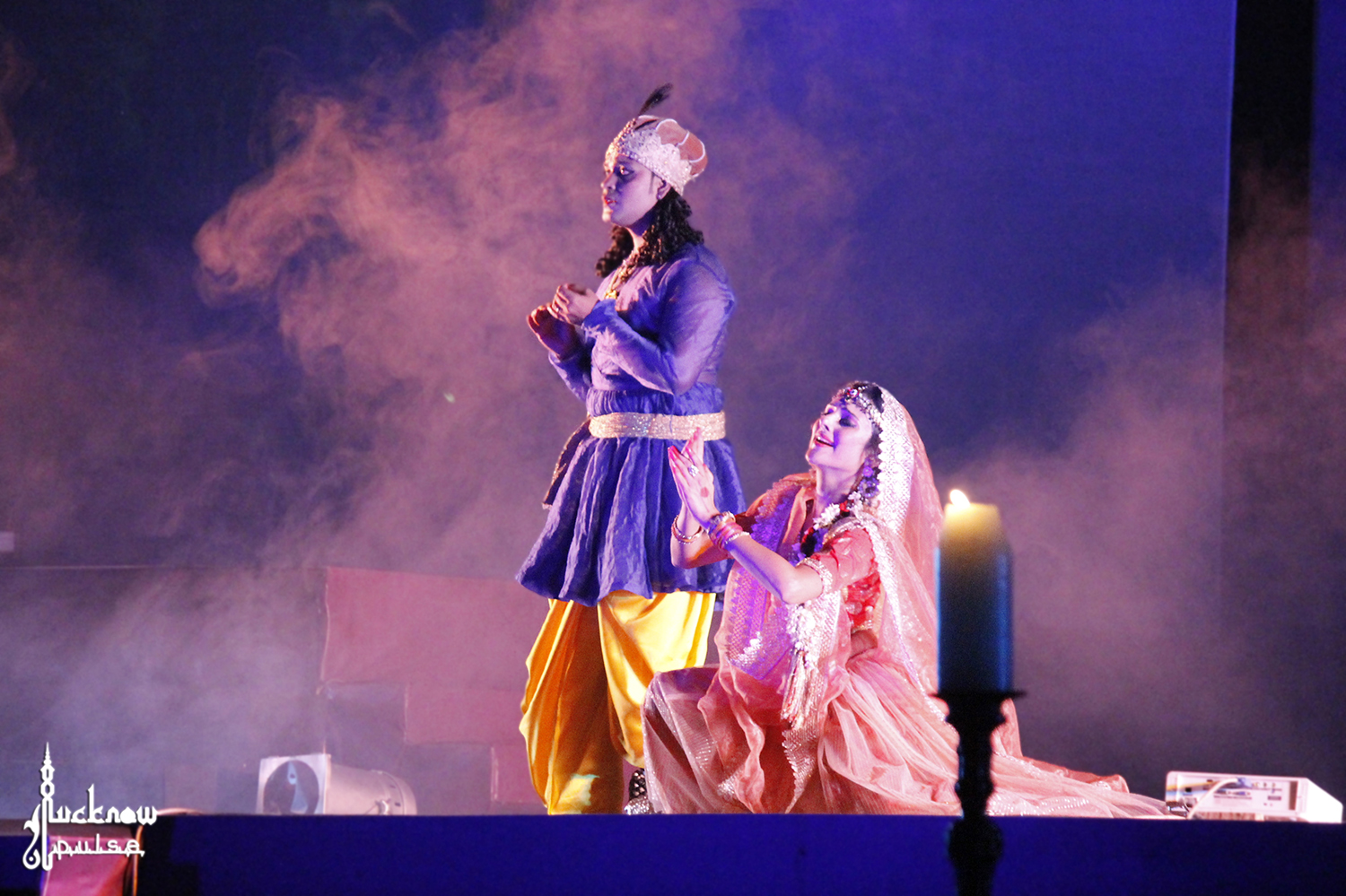 The third annual Wajid Ali Shah Festival, held on 14th February, 2016 at Chhattar Manzil, transported the audience to Matia Burj where Nawab Wajid Ali Shah was exiled after the mutiny of 1857. The audience got to see the nostalgic nawab’s yearning to see Radha Krishna’s Raas that came alive in the form of a ballet. The event was graced by the Honourable Chief Minister of Uttar Pradesh, Mr. Akhilesh Yadav along with U.P.Tourism Minister Mr. Om Prakash Singh and Mr. Navneet Sehgal, Principal Secretary & Director General, Department of Tourism, Uttar Pradesh.

The ballet was based on the play – Radha Kanhaiyya ka Qissa, written by Nawab Wajid Ali Shah and directed by Muzaffer Ali Sahab, bringing to life the era of the tenth Nawab of Lucknow, Nawab Wajid Ali Shah. The Nawab penned the ballet when he was exiled in Matia Burj, Calcutta. The Wajid Ali Shah Festival is organized by Rumi Foundation, a charity organization functioning under the guidance of Muzaffar Ali Sahab.

The objective of Wajid Ali Shah Festival is to help the Lucknowites re-connect with their roots and to realize the worth of Awadh’s composite culture. The ballet took the audience back to the magnificent Nawabi era that had the mystical bonding of Radha and Kanhaiyya unfold beautifully for Nawab Wajid Ali Shah. The ballet started with Nawab Wajid Ali Shah expressing his longing to see Radha Kanhaiyya ka Raas, a desire he had been nursing for 24 long years. The wish of the last Nawab of Awadh turns into a reality and he witnesses the magical “Radha Kanhaiyya ka Qissa”, where Radha and Gopis dance to the mesmerizing tunes of Krishna’s “Murli”.

The ballet came alive with Radha, Kanhaiyya, and the Gopiyaan looking exquisite in the avatars. Radha, however, gets upset with Kanhaiyya as his Murli gets stolen. Kanhaiyya tries his best to woo Radha back with his beautiful rendition “Arre Meri Maharani, Arre Haan Radha Rani mose  kuch chook padi”. Kanhaiyya fails, but on the insistence of Gopi Lalita, again attempts to pacify Radha. Kanhaiyya sings a beautiful song for Radha, “Radha Ji Mose Bolo Kyu Na Re, Has Has Ghoonghat Kholo Kyu Na Re”, and ultimately succeeds in winning her back with his persistent wooing. It is also revealed in the end that the Gopiyaan played the mischief and had hidden the musical Murli of Krishna Kanhaiyya.

The ballet received adulation from everyone who saw it till the end. Apart from depicting the bygone era of Nawab reign, the “Radha Kanhaiyya ka Qissa” had all the charismatic appeal to enthral the audience.

The program also witnessed the unwrapping of the Uttar Pradesh Paryatan Policy 2016 along with U.P.Tourism Calendar. The event had two-edged objective of promoting art, craft, culture and tourism in Uttar Pradesh and highlighting the richness and importance of Lucknow, the city of Nawabs

The event underlined the fact that the state of Uttar Pradesh deserves attention and prominence all the more as it is blessed with both natural beauty and architectural delights that can help in attracting large number of vacationers, boosting both the tourism industry and the revenue for the state.

LucknowPulse team was fortunate to attend the event and we appreciated every bit of the festival, right from Vintage Car Exhibition and Rumiana – Poetry Reading at La Martiniere Chapel to the grand finale –Radha Kanhaiyya ka Qissa at Chhattar Manzil Palace, Lucknow.